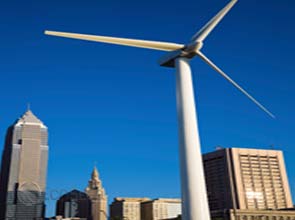 According to the experts at W.R.I., Ohio has been pushing efforts towards a strong clean energy sector and emissions reductions.

An analysis conducted by the World Resources Institute shows that the state of Ohio can meet, even exceed, future carbon pollution standards that the United States Environmental Protection Agency will establish in the future.

According to the experts at W.R.I., Ohio has been pushing efforts towards a strong clean energy sector and emissions reductions. In fact, the state can achieve a 27 percent emissions reduction below 2011 emissions levels through a combination of already existing state policies and improved use of existing infrastructure.

Even as it is right now, the state, with their policies and infrastructures, is poised to reduce carbon pollution standards that the E.P.A. is expected to put into place in the near future, in line with President Obama’s Climate Action Plan.

“Lowering emissions will protect human health and the environment from dangerous climate change while creating new business opportunities. Ohio can make serious progress at the state level. That state has made good progress in reducing its emissions and is posed to drive a greater shift toward a low-carbon future,” said senior associate at W.R.I. Michael Obeiter, who led the analysis.

W.R.I.’s report even goes the distance by saying that by strengthening and improving their already existing tools, the state could surpass the federal limitations and lower emissions by as much as 62 percent below 2011 levels by 2030.

“Forward-looking states, like Ohio, can achieve significant reductions through policies that are both cost effective and flexible. Our analysis finds that Ohio can be a significant contributor toward the U.S. goal of reducing harmful pollution that is driving climate change,” concluded Mr. Obeiter. – EcoSeed Staff