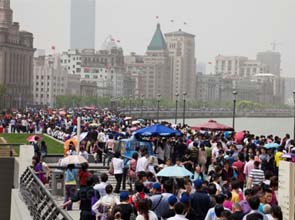 The city of Shanghai could be the next to find itself in a standstill by an extreme flooding event according to a study by a team of scientists from Britain and the Netherlands.

In this new study, nine cities built on river deltas around the world were assessed to calculate their flood vulnerability. In addition to Shanghai these were, Dhaka. Bangladesh; Casablanca, Morocco; Calcutta, India; Buenos Aires, Argentina; Osaka, Japan; Marseille, France; Rotterdam, the Netherlands; and Manila, Philippines.

According to Professor Nigel Wright, who worked on the study as the leader of a team from the University of Leeds, a city’s vulnerability to extreme flooding is a complex issue that should take in a lot of variables including what effect exposure to flooding would have in economic activities both locally, nationally and on the global scale.

“Our index looks at how cities are prepared for the worst – for example, do they have flood defenses, do they have buildings that are easy to clean up and repair after the flood? It is important to know how quickly a city can recover from a major flood,” explained Professor Wright.

According to their study, the Chinese city of Shanghai is particularly vulnerable because it is exposed to powerful storm surges and the land subsides as sea levels rise. Also, the city is poorly prepared, with little resilience to a major flood and insufficient flood shelters for victims.

Many climate scientists say extreme weather events brought by climate change, such as larger storms and heavier rainfall, will increase the likelihood of floods in many areas.

Unseasonal and extreme rainfall has triggered massive floods in the United States, Australia, Ireland, Thailand, North and South Korea, Pakistan and India in this decade alone.

The Philippines is the most recent to suffer from massive floods as several weeks of rain culminated into two days of heavy downpour that saw the capital city of Manila brought to a standstill.

The study also found that Manila is unlikely to fare any better in the future, a large population and its importance as the political and business capital making it extremely economically vulnerable to floods. It’s also regularly hit by storms.

After Shanghai, the city of Dhaka was found to be the second most vulnerable, sitting just meters about current sea levels and finding itself regularly hit by tropical cyclones and floods.

Calcutta shares Manila and Dhaka’s vulnerabilities while Buenos Aires and Casablanca were found to have very little flood resilience or protection.

The European cities of Marseille and Rotterdam are also exposed to flood risks, building in low-lying areas and subject to storms and high river levels. But they are not as vulnerable as they have good flood management infrastructure and tight building regulations for flood-prone areas.

Osaka was the least vulnerable city of the nine as it is not as often in the path of stormy weather and is also not as important in political or economic terms as the other cities studied. (K.R. Jalbuena)