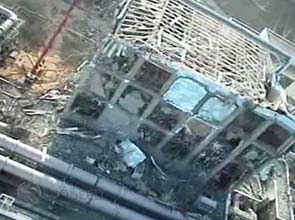 New data shows much more radiation leaked from the Fukushima Daiichi nuclear power plant in the early days of the crisis than first thought, though the U.S. nuclear safety regulator said the crisis appeared to be «static» as engineers at the Fukushima nuclear plant struggle to cool overheating fuel rods.

After recent fears of possible contamination in the region, neighboring China said that the impact there had been small, noting the amount of radiation was about one percent of what it had experienced from the world’s worst nuclear disaster at Chernobyl.

The total cost of the March 11 triple disaster has been estimated at $300 billion, making it the world’s most costly natural disaster.

«The effects of the earthquake will be temporary. It will cause various indirect damage such as dampening consumer sentiment but the economy will pick up toward the end of this year. That’s what many economists are thinking,» Japanese Economics Minister Kaoru Yosano said.

The new economic assessment for a country that has been mired in recession for most of the past 15 years came after another relatively strong quake rocked northeastern Japan on Wednesday. But there were no reports of any damage to a region already devastated by last month’s tremor and tsunami.

Plant operator Tokyo Electric Power Co appears to be no closer to restoring cooling systems that are critical to lowering the temperature of overheated nuclear fuel rods in the damaged reactors.

The company has begun looking into how it will store and transport the spent fuel from the reactors, though work cannot start until they are in cold shutdown, Tepco official Mitsuo Matsumoto told reporters.

It is expected to take months before the damaged reactors will have cooled down. Some officials have speculated that the authorities may have to entomb the plant if the crisis drags on too long, the solution that was eventually used to close off Chernobyl.

On Tuesday, Japan’s science ministry said small amounts of strontium, one of the most harmful radioactive elements, had been found in soil near Fukushima Daiichi.

Hidehiko Nishiyama, a deputy director-general of the Nuclear and Industrial Safety Agency, said the decision to raise the severity of the incident from level 5 to 7 – the same as the Chernobyl disaster in Ukraine in 1986 – was based on cumulative quantities of radiation released.

No radiation-linked deaths have been reported since the earthquake struck, and only 21 plant workers have been affected by minor radiation sickness, according to Chief Cabinet Secretary Yukio Edano.

Late on Tuesday, Mr. Edano said he was aware the upgrading of the severity classification would worry people, although the top U.S. nuclear regulator backed the move.

«The efforts continue to … transition from static to stable to ensure long-term ultimate ability to cool the reactors and to provide cooling to the spent fuel pools,» Gregory Jaczko, chairman of the U.S. Nuclear Regulatory Commission told a Senate committee hearing in Washington.

Earlier, NISA said the amount of radiation released into the atmosphere from the plant, 240 kilometers (150 miles) north of Tokyo, was around 10 percent that of Chernobyl.

The blast at Chernobyl blew the roof off a reactor and sent large amounts of radiation wafting across Europe. The accident contaminated vast areas and led to the evacuation of well over 100,000 people.

Still, the increase in the severity level heightens the risk of diplomatic tension with Japan’s neighbors over radioactive fallout. Chinese Premier Wen Jiabao told Mr. Kan on Tuesday he was «concerned» about the release of radiation into the ocean.

China has so far been sympathetic rather than angry, though it and South Korea have criticized Tepco’s decision to pump radioactive water into the sea, a process it has now stopped.

«Its impact on our country’s environment has been small, equivalent to about one percent of the impact of the Chernobyl nuclear accident on our country,» China’s nuclear safety body said on Wednesday.

«There is no need to adopt protective measures.»

The statement appeared after Beijing issued an account of Chinese Premier Wen Jiabao’s phone call on Tuesday with Japan’s premier, when the Chinese leader also sought to show Beijing is taking the radiation leak seriously but without sowing panic among the Chinese people.