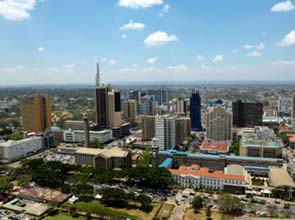 Under the C.D.M, industrialized countries can implement emission-reducing projects in developing countries, such as those in Africa and Asia. By doing so, they earn certified emission reduction credits which can be sold to the carbon markets or help them meet their own national targets.

“The opportunities in Africa are increasing. I am convinced that the growing interest in C.D.M. projects will help turn the tide and contribute to firmly positioning Africa’s opportunities for the carbon market landscape beyond 2012,” said Christiana Figueres, executive secretary of United Nations Framework Convention on Climate Change at the just-concluded Africa Carbon Forum.

Neeraj Prasad, manager for climate change practice at the World Bank Institute, pointed out that there is an increased interest in the C.D.M. in Africa as indicated by statistics for the number of projects getting docketed, especially under the mechanism’s “Program of Activities” modality.

Introduced in 2005, the aim of Programmatic C.D.M., as it was called, was to broaden the C.D.M. field to replicable projects with low and physically spread greenhouse gas emissions reductions activities that would have been difficult and time-consuming to develop on a project-by-project basis.

“It is obvious that the capacity-building efforts are paying off and the message is getting out,” Mr. Prasad commented.

Mr. Christensen said the number of P.O.A.s in Africa is now almost 23 percent of all existing P.O.A. projects.

The Africa Carbon Forum, an annual event and a regional trade fair where knowledge in carbon investment is shared, was attended by more than 1,000 participants. It was held in Marrakesh from July 4 to July 6. (L.J. Polintan)