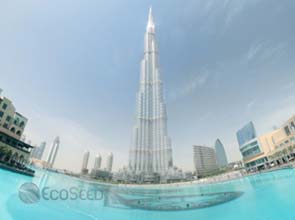 With outside temperatures soaring toward 50 degrees in summer, he likes to come home to his chilled oasis in this skyscraper city sprouting from the desert.

«When I go outside I feel that a gigantic hair dryer is blowing in my face,» the 36-year old marketing manager said.

«If I turn off the air-conditioning when I leave the house, I will spend even more energy to cool down the house when I’m back. So I leave it.»

Ali, whose name has been changed for privacy, is not unusual in this high-rise city that has rapidly transformed from a sleepy fishing village to an international financial center.

Many of Dubai’s estimated 2 million inhabitants leave their air-conditioning running 24/7, shrugging off tips from Dubai Electricity and Water Authority (DEWA) for electricity and water conservation.

Dubai’s non-stop running air-conditioners help drive the emirate’s summer peak demand per person to more than three times that of Spain – where cooling demand from its 47 million citizens has also surged over the last decade in scorching summers on the Iberian Peninsula.

Such heavy consumption in well-to-do UAE cities like Dubai and federal capital Abu Dhabi mean the wealthy Arab state could see another summer of sporadic power blackouts in the northern emirates. It will also face a ballooning gas bill for the fuel used to generate 85 percent of its electricity with global gas prices having doubled from a year ago.

In Dubai, major landmarks such as an indoor ski slope – where snow made at minus 8 degrees Celsius blankets three football pitches worth of pistes – have helped drive power consumption and climate-warming carbon emissions skyward.

The Burj Khalifa, the world’s tallest building, uses some 150 megawatts of power, equal to about a tenth of the output of the world’s biggest nuclear reactors in a region that relies almost entirely on fossil fuels.

At its base, one of the world’s largest malls houses an Olympic-sized ice rink that helps keep some 150,000 daily visitors cool in the searing heat, desert dust and humidity.

Dubai alone used nearly 34,000 gigawatt hours (GWh) of electricity, with 46 percent being used by the commercial sector and nearly 30 percent in housing. The number of electricity consumers in the UAE’s business and trading hub rose nearly 10 percent in one year to over 580,000 in 2010.

The natural desire to keep cool and entertained in the Gulf’s hostile climate has helped make the United Arab Emirates one of the world’s top five power consumers per capita while emissions of climate-warming carbon from Emirates are more than twice those of U.S. citizens.

Dubai’s power demand alone accounts for nearly half of the UAE’s supplies and its use of precious electricity could leave the northern emirates, which receive supplies after Dubai and Abu Dhabi, in the dark.

The demand is expected to be even higher this year with the holy month of Ramadan falling in August, prompting citizens who traditionally flock abroad in the summer to stay home.

Residents of northern emirates such as Sharjah and Ras Al Khaimah are no strangers to blackouts. In 2009, residents had to rent hotel rooms or drive to relatives’ homes to escape the suffocating heat after power went off for many hours a day.

Authorities have promised a blackout-free summer 2011, for Dubai at least, despite industry officials expecting power demand to rise at least another 5 percent this year – and severely strain resources.

«I can assure you there will be no power shortage for the next five years,» Saeed Mohamed al-Tayer, the chief executive of Dubai Electricity and Water Authority (DEWA), said in late June.

But a series of mid-June power cuts in Khor Fakkan, which is based in the neighboring emirate of Sharjah and is home to a major container terminal, has raised fears of yet another UAE summer with long, hot hours to endure with no power.

«There’s not enough planning in the northern emirates on how they’ll get the power for their industrial development,» Robin Mills, a Dubai-based energy economist said.

«Then there’s the problem of gas shortage where, especially in the northern emirates, you have to burn oil instead of gas, which is much more expensive,» he added.

Around 80 to 85 percent of the UAE’s power is generated from burning natural gas and the rest comes from oil – an option of last resort due to the higher cost of crude and the loss of lucrative crude exports.

The UAE’s gas reserves are plentiful but have not been developed fast enough to meet the soaring demand for power and industrial gas feeds.

In March, the UAE pledged $1.6 billion for infrastructure in less developed northern emirates, seen as more prone to unrest than Dubai, the business hub, or Abu Dhabi, the federal capital.

Peak electricity demand in the UAE is estimated to rise by more than 12 percent annually between 2010-2020, according to Abu Dhabi Water and Electricity Company (ADWEC). ADWEC officials, contacted by Reuters, were not immediately for available for comment.

In a bid to diversify its energy sources, the country plans to build four 1,400-megawatt nuclear reactors on the coast of Abu Dhabi, with the first expected to open in 2017.

Until then, in a region so dependant on cooling, efficient use of the scarce power supplies should be top of the agenda for the UAE, experts say.

«Up to 70 percent of your energy is going to cooling and air con units are running at full capacity,» Dustin Cherniawski, director of GreenWave Capital, which brings energy-saving technologies to the Middle East.

«But they have to be in excellent shape so you don’t waste any energy….»The majority of AC units we encounter would benefit from increased frequency and quality of maintenance.»