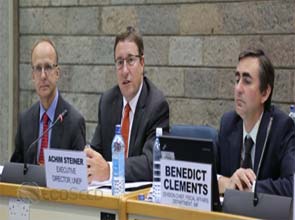 Fossil fuel subsidies play a major role in hindering the transition to an inclusive green economy, according to experts.

Fossil fuel subsidies hamper the transition to an inclusive green economy due to its contribution to fiscal instability and undermining governments’ efforts to combat serious economic and environmental challenges, such as climate change.

The statement was made during the two-day event co-organized by the United Nations Environment Program, with the theme “Reforming Fossil Fuel Subsidies for an Inclusive Green Economy.”

According to experts, reducing or eliminating harmful fossil fuel subsidies, along with properly pricing energy to account for environmental impacts, is one of the most promising ways governments can promote a transition to a greener economy and even the playing field for investments in energy efficiency and renewable energy.

Fossil fuel subsidies around the world are estimate to be in the range of $500 billion. Findings suggest that the removal of these subsidies could lead to a 13 percent decline in carbon dioxide emissions.

“Fiscal policies are of particular importance in a green economy transition. Confronted by a fiscally constrained world, government reforms might appear to be a daunting challenge,” said U.N. Under-Secretary-General and U.N.E.P. Executive Director Achim Steiner.

“However, it is important to note that fossil fuel subsidies cost countries precious funds. For example, they divert government resources from pro-poor spending in Africa, where governments spend an estimated 3 percent of G.D.P. – equivalent to their total health care allocation – on fossil fuel subsidies,” Mr. Steiner explained. – EcoSeed Staff