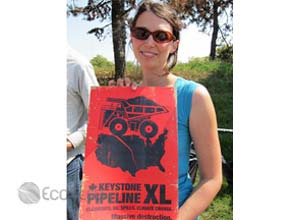 However, both the Nebraska Supreme Court and the House of Representatives have signified support for the project.

Despite misgivings from the public and the White House, proponents of the Keystone XL pipeline project continue to push ahead.

It can be remembered that the U.S. president’s stand on the pipeline is to not sign the bill if the Keystone Pipeline does pass Congress (see related story).

However, both the Nebraska Supreme Court and the House of Representatives have signified support for the project.

On January 9, the Nebraska Supreme Court threw out a lower court ruling and approved the Keystone Pipeline’s route. This decision was welcomed by Keystone Pipeline project owner and developer, TransCanada.

TransCanada noted that their application for federal review can now be picked up where it left off, stressing that the project is of America’s national interest.

Following the decision of the Nebraska Supreme Court, Danielle Droitsch, Canada project director at the Natural Resources Defense Council, holds that the pipeline needs to be denied.

“This ruling clears the way for President Obama to determine whether the dirty tar sands pipeline is in the national interest. The ruling doesn’t make it right for the Congress to act as a permitting agency, usurp presidential authority or short-circuit the president’s obligation to decide whether the pipeline is good for the country. It’s not. It needs to be denied,” she said.

Meanwhile, also on January 9, the House of Representatives made the decision to pass legislation to force approval of the pipeline. The legislation passed by a vote of 266 – 153.

Environmental organization Friends of the Earth protested the move by the House of Representatives. In a statement, climate and energy associate Luisa Galvao reiterated that President Obama should put a stop to this.

“Today, House Republican leadership celebrated their ‘New Year’ in charge of both Houses of Congress by paying back the oil industry that put them in office with approval of the Keystone XL pipeline. Republican leadership chose to ignore long-standing laws and procedures to rush the construction of a disastrous project with no redeeming value,” Ms. Galvao said.

“President Obama recognizes the travesty that is this bill, and has already threatened to veto is and others like it. Today’s vote reaffirmed that pipeline proponents do not have enough votes to override a veto. President Obama should put an end to this nonsense once and for all because the pipeline fails his climate test and is not in the country’s interest,” she explained.