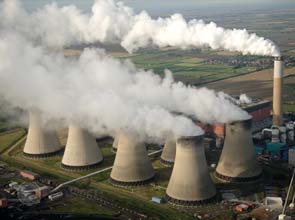 Global carbon dioxide emissions show no sign of abating and may reach record highs this year, the Global Carbon Project predicted. What is even worse is that last year, emissions reductions were only 1.3 percent below the record 2008 figures – well below the anticipated 2.8 percent downturn.

Pierre Friedlingstein, lead author of the study, said that the carbon intensity improved by only 0.7 percent in 2009 – in stark contrast with its long-term average of 1.7 percent per year. This was because of an increased share of emissions from emerging economies with relatively high carbon intensity and a rising dependence on coal.

But despite the drop of fossil fuel emissions last year, the figure still stood at 30.8 billion tons of carbon dioxide – the second highest in human history. The biggest increase took place in developing countries, while developed countries show rather steady growth for the last decade.

The global financial crisis brought down emissions of several big economies, such as the United States, Britain, Germany, Japan and Russia. However, emerging economies that performed strongly during the crisis, such as China and India, recorded susbtantial increase in emissions.

The study projects if economic growth proceeds as expected, global fossil fuel emissions would increase by more than 3 percent this year, approaching the high emissions growth rates observed through 2000 to 2008.

But on the bright side, emissions attributed to deforestation have decreased by over 25 percent since 2000 compared to the 1990’s.

“For the first time, forest expansion in temperate latitudes has overcompensated deforestation emissions and caused a small net sink of [carbon dioxide] outside the tropics”, says Corinne Le Quéré, from the University of East Anglia and the British Antarctic Survey.

The Global Carbon Project was established in 2001 to create a common, mutually agreed knowledge base in order to stop the increase of greenhouse gases in the atmosphere.