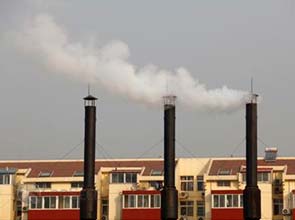 China’s chief negotiator in international climate change talks, Xie Zhenhua, made the comment while spelling out his government’s position ahead of negotiations in Cancun, Mexico, from November 29 over a new global pact to fight global warming.

Scientists and overseas bodies have said that since 2006 to 2007, China’s greenhouse gas pollution has surpassed the United States’, the world’s top emitter for the 20th century.

But until now Beijing has hedged. Its officials have said it may possibly be the top emitter, that the issue needs more study or that average emissions per capita is a fairer measure to guide policy.

«Now we stand at world number one in emissions volumes,» Mr. Xie told a news conference in Beijing.

Rich countries should nevertheless lead with steep cuts in their emissions, said Mr. Xie, since over time they have contributed most to the build-up of greenhouse gases trapping more solar heat in the atmosphere, and they should give poorer countries room to grow their economies and emissions.

«China is taking steps in the hope that we can peak (in emissions) as early as possible,» he said.

In a possible sign that the top status remains sensitive for China, Mr. Xie’s comment did not appear on the transcript of his news conference on the government’s website and nor were they reported by the official Xinhua news agency.

The government does not issue recent statistics for those emissions.

The mixed signals underlined how difficult it will be to craft a climate change deal that fits needs of both emerging economies such as China and India and the advanced economies, which say their steps to cut emissions could mean little without bigger efforts from the developing world.

In 2009 China’s emissions of carbon dioxide – the main greenhouse gas from burning coal, oil and gas – reached 7.5 billion metric tons, a rise of 9 percent on the previous year and accounting for 24 percent of the global total, according to BP.

But China rejects an internationally binding limit on its greenhouse gas emissions as unfair, because it contributed less to the problem historically and its emissions per-capita are still relatively low.

Beijing instead wants the Kyoto Protocol as the key climate treaty, under which poorer nations, including China, take voluntary, non-binding steps to curb the growth of emissions while they focus on development.

Under Kyoto, all rich countries agreed to legally binding emissions goals, with the big exception of the United States, which refused to become a party.

The United States and some other rich nations want a new global deal to discard that distinction.

Mr. Xie said China wanted the Cancun talks to make progress toward a binding treaty to hold down global emissions. But Beijing will insist that the dividing line between rich and developing nations remain.