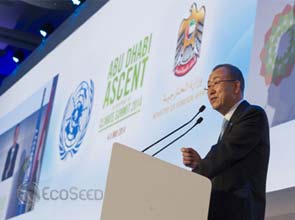 In the event “Abu Dhabi Ascent,” the first international meeting which discusses the conclusions made from the recent Intergovernmental Panel on Climate Change reports (see related story), Mr. Ban noted that climate change is the defining issue of the present time.

“Many of the solutions we need already exist. Many others are being rapidly developed. But we need to deploy them at a scale that matches the challenge,” said the U.N. chief.

“We are rapidly approaching dangerous thresholds,” warned the secretary-general. “The longer we delay, the more we will pay.”

Mr. Ban explained that climate action now means a number of benefits for everyone across the globe.

Mr. Ban added that in order to gain these benefits, climate action needs global cooperation, especially in the areas of finance, investment, and technology sharing.

He also invited governments to join the upcoming Climate Summit which is “designed to shape a collective ambitions vision anchored in concrete action” that will convene in New York this September 23.

“I am inviting Heads of State and Government, along with mayors and senior representatives from business, finance and civil society, to join a ‘race to the top’,” he said.

“I am asking them to announce bold commitments and actions that will catalyze the transformative change we need. The summit will focus on solutions.” – EcoSeed Staff