President Obama reiterates the need to act against climate change 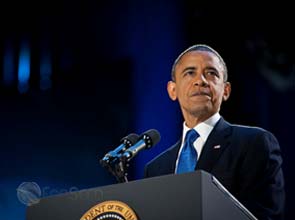 President Obama reiterated the need to combat climate change and his administration’s determination to continue to do so during his State of the Union address.

No challenge poses a greater threat to future generations than climate change according to United States President Barack Obama.

President Obama reiterated the need to combat climate change and his administration’s determination to continue to do so during his State of the Union address.

“The best scientists in the world are all telling us that our activities are changing the climate, and if we do not act forcefully, we’ll continue to see rising oceans, longer, hotter heat waves, dangerous droughts and floods, and massive disruptions that can trigger greater migration, conflict, and hunger around the globe,” the U.S. president said.

“The Pentagon says that climate change poses immediate risks to our national security. We should act like it,” he added.

The president noted that his administration has done more to combat climate change than ever before, from the production of energy, to the way it is used.

“And that’s why I will not let this Congress endanger the health of our children by turning back the clock on our efforts. I am determined to make sure American leadership drives international action,” he explained.

“As the president noted, America produces more wind energy than any other country in the world. We’re number one. Hard working Americans and successful federal tax policy helped accomplish this. By providing long-term, stable policy, we can retain our number one position, keep well-paying jobs and invest in American communities,” Mr. Kiernan said.

“America is blessed with excellent wind resources. The U.S. invented utility-scale wind farms, and by investing in them here in the U.S., we now have some of the best infrastructure this country has ever build,” added Mr. Kiernan.

Rhea Suh, president of the Natural Resources Defense Council, also made a statement in line with the U.S. president’s State of the Union address.

Ms. Suh pointed out that the president’s Clean Power Plan, along with the country’s first-ever limits on carbon pollution from power plants (see related story), is just what U.S. needs.

“We also must shut down the Republican big polluters’ agenda in Congress, which seeks to roll back health and environmental laws that have protected our families and communities for decades. The GOP game plan is all about blocking action on climate – and is devoid of solutions,” Ms. Suh said.

“Our lives and our homes are much more important than the big polluters’ profits that the congressional Republican leadership has championed as its top priority,” she said.

It can be remembered that environmental organization Friends of the Earth climate and energy associate LusiaGalvao made a statement just this month that the Republican leadership chose to ignore long-standing laws and procedures to rush the construction of a disastrous project with no redeeming value – pertaining to the Keystone XL pipeline (see related story). – L. Polintan