Turbine blade goes up in the EU quarter 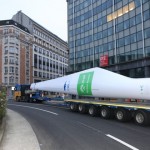 Sparkling white, tall and sleek, right in the middle of the EU-quarter stands a 29.5 metre wind turbine blade. The slender wing casts a shadow on the European Council Justis Liptus building and is visible to anyone going into the European Commission and Council main buildings on their way to work this morning.

It is a symbol of Europe’s leading renewable energy – wind power – a clean, CO2-free fuel that is driving the fight against climate change, securing economic benefits and increasing the security of our energy supplies. Seeing this aerodynamic feat of engineering up close is a rare and impressive experience.

Weighing in at 4,100kg, this type of blade is used in 1-1.3MW turbines which can produce enough electricity to meet the annual average electricity consumption of over 760 households. Despite its size – it’s nearly as tall as the 16-floor Commission headquarters – it is relatively small compared to the 60m blades used to power 6-7MW turbines today.

The blade arrived on trucks in Brussels last night after a long haul from the Netherlands already adorned with EWEA and sponsors ENEL Green Power labels. It took several hours and a team of engineers to put up the foundation, fit the main blade exactly into it and finally the pointed tip which needed a massive crane to put it in place.

“We are very excited this project worked out, the setup alone was spectacular and the finished installation is all the more impressive and shows that wind energy is not only providing environmental and economic benefits but can also be an aesthetic object, a symbol for a renewable energy future,” said Elke Zander, EWEA’s campaigns officer.

The blade has been put up to mark Global Wind Day on 15 June, but also for the beginning of the EU’s Green Week (1-4 June) and the Fête de l’environnement (6 June). Information panels will (from this afternoon) surround the blade highlighting the benefits of wind power.

“It is also a reminder that   Europe need not forever be dependent on imported, polluting and expensive fossil fuels. There is, in fact, enough wind blowing across the continent to power it seven times over,” Zander said.

Visit the Global Wind Day website for more information on what’s going on near you, and check out our campaign website to see how you can show your support for wind energy by adopting your own turbine. And for more photos of the blade, check our facebook page!