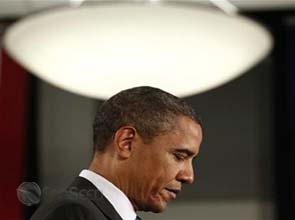 President Barack Obama urged the United States Congress on Friday to pass a $5 billion expansion of tax credits for clean energy manufacturing that he said would generate tens of thousands of new jobs.

Mr. Obama, accused by Republicans and some business leaders of a government overreach, also sought to strike a business-friendly tone and insisted his policies were aimed at unleashing the private sector as a catalyst for job growth.

«The private sector – not government – is, was, and always will be the source of America’s economic success,» he told a university audience in Nevada, a state struggling to overcome effects of a deep national recession.

While campaigning for Senate Majority Leader Harry Reid, who is in a tough fight for re-election in Nevada, Mr. Obama called on Congress to extend a tax credit program to foster private investment in clean energy manufacturing.

He estimated that the $5 billion expansion would generate nearly 40,000 jobs, and the $12 billion or more in private sector investment is expected to trigger could create up to 90,000 more jobs.

A now depleted $2.3 billion in clean energy tax credits was part of a $787 billion economic stimulus Mr. Obama signed last year to help lift the economy out of the worst recession in a generation. Many independent economists credit the package with helping to stave off a worse crisis.

But he is facing growing anxiety over government spending amid record United States deficits and Republican complaints that the country cannot afford any more stimulus spending.

Mr. Obama counters that withdrawing support too soon could hurt the fragile recovery.

«Our economy is growing, instead of shrinking. We have gained private sector jobs for each of the past six months, instead of losing them. Almost 600,000 new jobs,» Mr. Obama said at the University of Nevada, Las Vegas.

He acknowledged that was not nearly enough but said it would take more time to dig the economy out of its hole that includes a 9.5 percent unemployment rate that has lingered despite signs of a broader recovery.

Mr. Obama also is battling an image problem in parts of the business community that complain about government meddling.

The United State Chamber of Commerce plans to lay out its concerns with Obama’s policies toward business at a Jobs for America Summit: 2010 event next Wednesday in Washington.