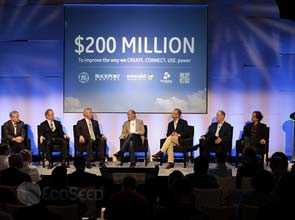 General Electric Company, in partnership with four leading venture capital firms, is inviting inventors, entrepreneurs, and startups worldwide to pitch in their breakthrough clean technology ideas for a smarter grid and bag a sizable investment from a $200 million fund.

The new G.E. ecomagination challenge aims to encourage groundbreaking ideas that will help usher the next generation power grid, which is smarter, cleaner and more efficient.

According to the International Electrotechnical Commission, about 8 percent to 15 percent of electricity is lost during transmission through power lines.

At the same time, the intermittent nature of renewable sources, such as solar energy or wind power, is a burden to most existing grids.

The Electric Power Research Institute estimates that the collective smart grid industry will grow to become a $200 billion market over the next decade.

«The smart grid is a new platform and a new market that is just beginning to be explored,” said Chris Anderson, editor in chief of Wired magazine and advisor to the challenge.

“Great ideas on how to do this can come from anywhere, so this competition is designed to tap the widest possible range of innovators, from big companies to entrepreneurs to students,» he added.
G.E. (NYSE:
GE
) is not only one of the biggest technology conglomerates in the world, but it is also one of the largest players in green industries. The company is the number one supplier of wind turbines in North America, and is also a top provider of smart meters for the smart grid.

In the last five years, G.E. has invested $5 billion in its banner ecomagination program and plans to double that investment by 2015. Ecomagination is a cornerstone of G.E.’s innovation and investment in research and development.

Over the next 10 weeks ending in September 30, innovators can submit ideas through the contest’s Web site ecomagination.com/challenge. By late October, G.E. will reveal the ideas which it wants to pursue for a commercial partnership. G.E. said it will disclose by November business deals that would have been formalized.

The challenge will look for original and technically sound proposals for renewable energy, power grid efficiency, green homes and buildings. All entries will be displayed on the dedicated Web site for the challenge.

«It puts G.E., I think, right where we want to be, in a leadership space, with a lot of partners,» said Jeffrey Immelt, G.E.’s chief executive officer, during the launch of the challenge on Tuesday in San Francisco, California.

«We’re not going to invent every great idea, but no one does commercialization better than we do,» Mr. Immelt stressed.

An evaluation committee made up of representatives from G.E. and its investment partners RockPort Capital, Kleiner Perkins Caufield & Byers, Foundation Capital and Emerald Technology Ventures will determine which ideas merit financing and commercial partnership.

The idea that will get the most number of votes from the public will receive a cash award of $50,000. Five other submissions that embody outstanding entrepreneurship and innovation will receive $100,000 each.

G.E. will also hand out a scientific merit award which will enable the winner to work with the company’s global research unit.

For the top prize, the evaluation panel will choose ideas that could receive one or more of the following: an equity investment by G.E. or its partners; a cooperative agreement to develop and market the product or technology; and a possible qualification of the product under G.E.’s ecomagination brand.

“We took on a challenge when we launched ecomagination five years ago and we have learned about the power of partnerships to deliver clean energy solutions today,” said G.E.’s chief marketing officer Beth Cornstock.

She continued, “The challenge announced today is about collaboration and harnessing the promise of fledgling ideas and businesses to transform our energy future. We are confident in people’s willingness to change the way the world uses energy and in the ideas that will make this possible.”