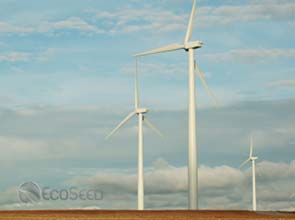 A 30-megawatt wind farm being built in Oahu, Hawaii will be one of the largest wind energy facilities in the region. Backed by a $117 million loan guarantee from the United States Department of Energy, the Kahuku Wind Project is being constructed by North American wind power company First Wind. It will use 12 Clipper turbines each rated at 2.5 MW. A 15-mega volt ampere, 10-MW per hour battery storage system will be used in the facility to improve stability.

First Wind subsidiary Kahuku Wind Power has signed a 20-year power purchase deal with the Hawaiian Electric Company for the sale of electricity produced from the wind farm at predetermined rates.

The facility is projected to generate enough power for 7,700 homes in the island each year. It can generate about 109 million kilowatt-hours of clean electricity, offsetting approximately 160 million pounds of carbon dioxide, an amount that could fill about 900,000 regular-sized living rooms. The project will create about 200 construction jobs.

The project will help Hawaii achieve its ambitious clean energy initiative which seeks to increase the state’s use of local renewables to reach 70 percent of total energy requirements by 2030.

According to the Energy Information Administration, the facility is capable of slashing annual oil consumption and carbon emissions by approximately 139,500 barrels and 96 million pounds, respectively.

“These wind turbines will provide another source of clean energy for Oahu’s power grid, further building on the progress Hawaii has made in becoming a world leader in clean energy,” Hawaii state governor Linda Lingle said.