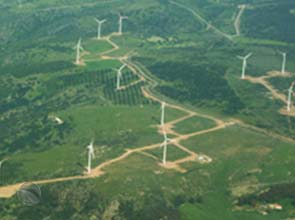 European power provider RWE Innogy has planted its foot firmly in the Italian market after it completed its first wind farm, the 24.65-megawatt San Basilio wind project in Sardinia, which it plans to follow up with another project soon.

The San Basilio wind farm located 35 kilometers north of the city of Cagliari can produce 45 gigawatt-hours of electricity each year and supply environment friendly power to around 15,000 households.

The wind farm is the first project of the joint venture formed between RWE Innogy and Fri-El Green Power S.p.A., an Italian wind farm developer and operator.

This year, the Italian Wind Energy Association predicts that the country’s wind portfolio will include another minimum of 1.1 GW wind expansion, or more if the economy picks up.

Recognizing this, RWE Innogy, the renewables arm of German company RWE A.G. (FWB:
RWE
[RWE:FF]), will also develop the 26-MW Ururi wind farm in the southern region of Molise, about 20 kilometers from the coastal town of Termoli.

The Ururi project will produce about 55 million kilowatt-hours of electricity every year and provide power to 18,000 households in the area when completed. The wind farm will also use 13 Vestas turbines.

Aside from Sardinia, the regions which have the most new installed capacity are Puglia, Calabria and Campania. Developments are also happening in Central and Northern Italy, particularly in Liguria, Piedmont, Veneto, Emilia Romagna and Tuscany.

The wind association projects that Italy’s installed wind capacity by 2020 could produce 27 terawatt- hours of electricity, which is approximately half of the nation’s 2020 target.

But despite its huge potential, Italy must improve its inadequate grid infrastructure which limits maximum wind power production, the association said.

Last year, some wind farms produced 30 percent less power than their normal capacity because of ineffective power grids, while others were limited by more than 70 percent and still a few were rendered unusable.