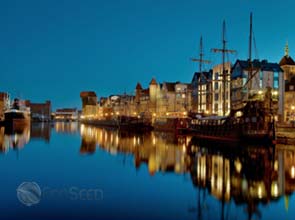 Poland must exploit its offshore wind energy  potential to increase its installed wind capacity to 12,000 megawatts and meet its commitment to the European Union, according to a new study by Frost & Sullivan.

Poland’s E.U. obligations require it to source 15 percent of its total energy consumption from renewable energy sources by 2020, a 7.2 percent increase based on 2005 levels.

Poland is an established leader in the wind energy sector in Central and Eastern Europe. The study shows that the country has an installed wind capacity of 1,005 MW as of June 2010, all of which are onshore wind projects.

The Polish wind industry added 181 MW of new capacity in 2009 alone, which brought the country’s total installations for the year to 724.6 MW, according to the Global Wind Energy Council.

There are also other factors that hinder offshore wind development, said Magdalena Dziegielewska, an analyst in Frost & Sullivan.

“One of them is that offshore platforms are established as artificial islands which, according to Polish law, can only exist for five years. This is a complication, as the investment process takes approximately seven to eight years and the wind farm operates for at least 20 years to 25 years,” she explained.

Thus, the Polish Marine Network Consortium was established to initiate development and remove the barriers faced by the offshore wind sector.

“One way to do so is to develop the Polish Baltic Track in order to establish a high voltage, transmission submarine work. This will assist in connecting offshore wind park power transformers with a main grid to allow future connections of wind parks,” Ms. Dziegielewska said.

If Poland attains the necessary legislative changes and grid development, it would see the first offshore wind parks rise within the next decade, Frost & Sullivan predicted.

The Polish Wind Energy Association estimated that offshore development will not start until 2018, and will only begin with 500 MW of installed capacity. However, the association is optimistic that the figure will increase to 1,500 MW by 2020.