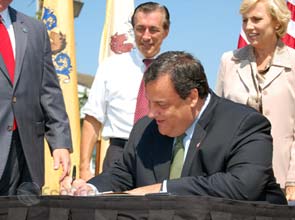 New Jersey Governor Chris Christie has signed into law on Thursday a bill that would spur economic growth through the development of the state’s renewable energy resources, particularly offshore wind.

The new law will establish an offshore renewable energy certificate program that requires an electric power supplier to purchase offshore wind energy certificates at a specific price under a time period required by the New Jersey Board of Public Utilities.

«The Offshore Wind Economic Development Act will provide New Jersey with an opportunity to leverage our vast resources and innovative technologies to allow businesses to engage in new and emerging sectors of the energy industry,» said Mr. Christie.

The state also established an energy policy in April that will make traditional and renewable energy in the state cheaper and more reliable.

Offshore wind development has been the subject of long-drawn debates in the United States. Critics point out that placing wind turbines out in the open seas entail steep costs – a major obstacle that had barred the 468-MW Cape Wind project from pushing through.

An offshore wind farm costs an estimated $4,600 per kilowatt, while its onshore counterpart only costs about half the price at $2,400 per kW, said the United States Offshore Collaborative.

However, the recent oil spill at the Gulf of Mexico may have changed critics’ opinion on offshore wind farms.

“The disaster in the Gulf of Mexico opened our eyes to the need for clean, sustainable energy that we can produce here at home,” said Stephen Sweeney, senator of Salem and primary author of the bill.

“Countries like China are already investing heavily and the United States should too if it wants to reap the benefits and not fall behind,» added Tom Kean Jr., senator of Essex and co-author of the bill.