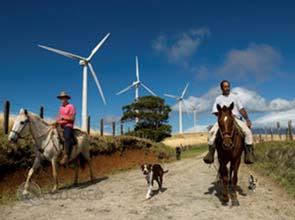 Enel is seeking to raise 3.4 billion euros ($4.8 billion) in the initial public offering of its green energy arm, as Italy’s biggest power company and the most indebted utility in Europe scrambles to cover its debts.  Enel (BIT:MI) will offer 28.3 percent of the shares in Enel Green Power until October 29, but it may raise the total available shares to 32.5 percent if the offer becomes oversubscribed.

Enel Green Power, which currently handles an installed capacity of 5,700 MW from a mix of wind, solar, geothermal, hydroelectric and biomass facilities, will reportedly list in Milan and Madrid in early November.

Reports revealed that Enel had initially introduced a price range of 1.9 euros to 2.4 euros for each share of Enel Green Power, but the Italian power giant was forced to bring down the price target for the green energy company after investors called for lower rates.

Through the initial public offering, as well as other asset disposals, the company hopes to reduce its debt to 45 billion euros by the end of this year.

“We are continuing to pursue our deleveraging policy which will enable us to absorb the effect of Endesa’s acquisition and to maintain our commitment to reduce our net consolidated financial debt to 45 billion euros by the year-end,” said Fulvio Conti, Enel chief executive and general manager, in a previous statement.

In September, the company finalized the sale of an 80 percent stake in its subsidiary Endesa Gas S.A. The sale rated Endesa’s gas transport and distribution assets in Spain at an estimated 1 billion euros and was expected to reduce the subsidiary’s consolidated financial debt by about 800 million euros.

The company also sealed a memorandum of understanding with IDGC Holding to develop advanced smart grid technologies in Russia.

Additionally, both companies are looking into various modes of cooperation in grid asset management, including the prospect of creating a joint company.