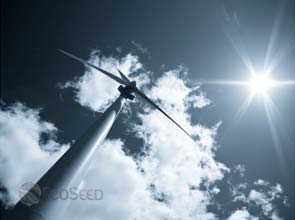 Manulife, a top Canadian financial services group, created and headed a group of Canadian companies to raise the amount for a 21-year term to support the Pointe-Aux-Roches wind project. Manulife also invested 60 million dollars in the project.

The Pointe-Aux-Roches wind farm will comprise 27 units of 1.8-MW wind turbines placed in the town of Lakeshore, south of Lake St. Claire, about 35 kilometers east of Windsor, Ontario.

The wind power project has acquired environmental permits and other approvals and has been scheduled for completion by 2011. Electricity produced by will be purchased by the Ontario Power Authority under a feed-in tariff contract.

“The Pointe-Aux-Roches financing represents the first financing under Ontario’s new feed-in tariff program. We are pleased that Pointe-Aux-Roches is moving forward and will soon be providing clean, renewable energy to the province,” said Mike Crawley, president of International Power Canada.

International Power Canada, Inc. is one of Canada’s largest independent wind power developers with wind and solar projects at different development stages throughout Canada. The company has presently completed 178 MW of wind power projects in Ontario.

It is a wholly-owned subsidiary of International Power P.L.C., a publicly traded Britain-based power generation company.

Manulife has closed 1.8 billion dollars and provided $840 million dollars in financing for 13 clean energy projects in Canada for the past five years. It operates as Manulife Financial in Canada and Asia and as John Hancock in the United States.

The wind farm is one of the six projects Manulife expects to close in 2010 in North America.

“As one of Canada’s industry leaders in financing renewable energy generally, and wind energy projects in particular, Manulife supports projects like Pointe-Aux-Roches that are environmentally friendly and help buttress the long-term economic growth of Ontario, Canada and North America,” said Bill Sutherland, senior managing director and head of the Canadian project finance team at Manulife Financial.