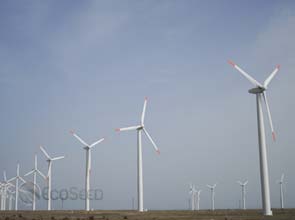 Renewable energy experts from Bulgaria and the European Wind Energy Association criticized Bulgaria’s renewable energy policy for not making the most out of the country’s wind energy resources.

The Bulgarian government seeks to establish more than 1.2 gigawatts of wind-generating capacity by 2020 and limit grid access to wind power at 1.8 GW. However, experts find this number too modest considering the country’s wind energy resources.

According to studies, Bulgaria boasts of an average wind speed of up to 9.5 meters per second, enough to generate electricity through wind turbines. With such potential, the country could source 13.5 percent to 15 percent of its total electricity demand from wind energy by 2020.

In fact, the association expects the Bulgarian wind industry to install 3,000 megawatts of wind power in the country by that same year. This would boost the country’s independence from foreign-sourced fossil fuels, create long-term green jobs in the energy sector and attract lucrative investments.

“It is hard to understand why the government seems to favor fossil fuel and nuclear rather than wind power, which has no fuel or carbon costs and produces no waste. The government is putting substantial green investments at risk,” argued Velizar Kiriakov, president of the Association of Producers of Ecological Energy.

In January 2009, Bulgaria was hit with a serious energy crisis as Russia stopped supplying the country with imported gas, its major power supply.

Factories and municipal centers were among those affected by the bitter cold as they were forced to switch to diesel fuel to power heating systems. Seventy-two schools dependent on gas-powered heating were also forced to close down due to power shortage.

“Given the problems Bulgaria has suffered with security of energy supply, Bulgaria’s own wind power is too good an opportunity to miss,” Mr. Moccia pointed out.