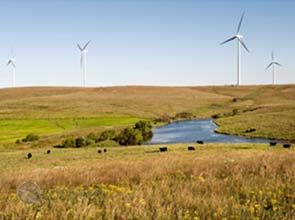 Recently floated renewable energy company Enel Green Power was granted the first tranche of a 600 million euro ($792.9 million) loan from the European Investment Bank, which the company itself plans to use for its renewable energy investments in Italy for the next three years.

The bank said Enel Green Power will use the first tranche amounting to 440 million euros for the installation of small- and medium-scale wind farms and photovoltaic plants in 50 locations throughout Italy. Most of the projects are in the country’s southern regions.

In three years, the company hopes to have installed 840 megawatts of renewable energy in Italy. The bank said the total cost of the company’s three-year investment program will be around 1.26 billion euros.

Enel Green Power’s portfolio includes water, sun, wind, geothermal and biomass energy-generating facilities set up in 16 countries around Europe and North and Latin America. The company has installed a total of 5,900 MW of low-carbon energy through over 600 running plants.

The company plans to increase this to 9,200 MW, with an expected capital expenditure of 5.2 billion euros as part of its five-year growth strategy starting this year.

It owns more than half of the venture, which will generate electricity from domestic solid biomass and might include developing projects for placing rooftop and ground-based PV systems on Consorzi Agrari properties.

It has as well begun operation of its first wind farm in Valea Nucarilor in Romania. Consisting of 17 turbines capable of 2 megawatts of power each, the Agigihiol plant will light 35,000 households and reduce 70,000 metric tons of carbon dioxide emission every year.

“We have a good list of projects that are entering the construction phase, and will substantially increase our presence in the country in the next two years,” said Francesco Starace, chief executive officer of Enel Green Power.