D.O.E. to provide over $1.2 billion for clean energy projects 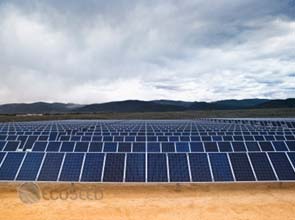 The United States Department of Energy plans to provide a total of $1.208 billion in loan guarantees to support the construction of two major renewable energy projects in the country.

“The Obama Administration is committed to bringing innovative renewable energy technologies to the market to support the country’s transition to a clean energy economy,” said Steven Chu, secretary of the Department of Energy.

The first new loan guarantee will go to the 290-megawatt Agua Caliente solar project in Yuma County, Arizona. The project could power approximately 100,000 households and offset 237,000 metric tons of greenhouse gases every year.

The Agua Caliente project is expected to belong among the world’s largest solar projects upon its completion by 2014. It will use thin film solar panels from First Solar, Inc.

The project will use fault ride-through and dynamic voltage regulation technologies, which are anticipated to enhance the reliability and predictability of electricity from the project.

The project will stimulate local economy by generating 400 construction jobs as well as state and local tax revenues, according to estimates by project sponsor NRG Solar, a diverse energy company with around 26,000 megawatts of generation capacity.

The Department will also provide $241 million for Diamond Green Diesel, a proposed joint venture between Valero Energy Corporation and Darling International Inc. that is expected to produce 137 million gallons of renewable diesel every year.

The biodiesel facility, which would be located in Norco, Louisiana about 20 miles west of New Orleans, has the potential to cut greenhouse gases by more than 80 percent over traditional petroleum-based diesel and to triple the amount of renewable diesel in the United States.

The facility can satisfy 14 percent of the country’s mandate to increase biomass-based diesel production and support local economy by creating 700 jobs during construction and over 60 jobs during operation.

Valero Energy is responsible for the facility’s design, construction and operation, while Darling International will supply feedstock, which primarily includes animal fats, used cooking oil and other waste grease streams, to the project.

The Department of Energy is said to have provided loan guarantees worth more than $17 billion to support 17 clean energy projects of over 37 million megawatt-hours of power that could address the needs of 3.5 million homes.