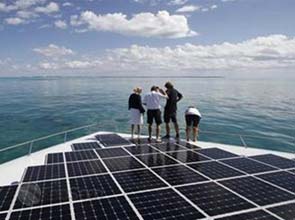 Channeling 2 percent, or $1.3 trillion, of global gross domestic product into greening sectors such as construction, energy and fishing could start a move toward a low-carbon world, a report launched on Monday said.

The investment would expand the global economy at the same rate, if not higher, as under present economic policies, said the report by the United Nations Environment Program.

«Investing 2 per cent of global G.D.P. into 10 key sectors can kick-start a transition toward a low-carbon world,» the Nairobi-based agency said in a statement.

«The sum, currently amounting to an average of around $1.3 trillion a year and backed by forward-looking national and international policies, would grow the global economy at around the same rate if not higher than those forecast, under current economic models.»

UNEP’s Executive Director Achim Steiner said in the statement: «With 2.5 billion people living on less than two dollars a day and with more than two billion people being added to the global population by 2050, it is clear that we must continue to develop and grow our economies.

«But this development cannot come at the expense of the very life support systems on land, in the oceans or in our atmosphere.»

Buildings are the single largest emitter of greenhouse gases because of inefficient heating in offices and homes, according to the study entitled «Toward a Green Economy.»

The sector’s footprint could nearly double by 2030, or 30 percent of total energy-related carbon dioxide.

The report suggests investing $108 million in the waste sector annually could increase recycling threefold by 2050 and reduce landfill contents by more than 85 percent.

Greener policies would still grow economies while reducing the ecological footprint by nearly 50 percent in the next 40 years, but some jobs would be lost as a result in sectors such as fisheries, the report said.

Investment in more sustainable productive activities would, however, offsets those job losses by developing sectors such as renewable energy.

Government subsidies in the fishing industry amount to about $27 billion a year and have created excess capacity and depleted fish stocks globally.

Greening agricultural with practices such as efficient use of water or organic nutrients would offer a means of feeding a global population of about 9 billion by 2050 without damaging nature.

Farming practices currently use more than 70 percent of freshwater resources and contribute more than 13 percent of greenhouse gases.

«Governments have a central role in changing laws and policies, and in investing public money in public wealth to make the transition possible. By doing so, they can also unleash the trillions of dollars of private capital in favor of a green economy,» said Pavan Sukhdev, head of UNEP’s Green Economy Initiative.