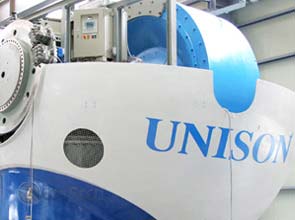 Buying the convertible bonds would give the Japanese conglomerate a stake totaling roughly 35 percent of Unison’s more than 23.3 million outstanding shares, if fully converted into common shares in the future.

Under the terms of the deal, Toshiba will be given the right to distribute Unison’s wind turbines worldwide through its overseas subsidiaries. Unison is currently offering two turbine models, a gearless 750 kilowatt turbine using permanent magnets and a 2-megawatt model using a traditional gearbox, both of which are for onshore use.

Toshiba will also work with Unison in developing “higher efficiency windmills” applying its experience with steam turbine generators. The Korean firm’s research and development unit has been planning to design 3-MW onshore and 3.6-MW offshore turbines even before the partnership with Toshiba.

Established in 1984, Unison is Korea’s longest established wind power equipment manufacturer. According to its website, Unison has an annual production capacity of 1 gigawatt at its factory in Sacheon, Gyeongsangnam-do province.

Based on Unison’s latest financial information published on its website, it has doubled its net income to 10.3 billion won between 2007 and 2008. However, the company receive a larged net loss of 28.5 billion won in 2009.Toshiba says that Unison hauled in revenues equivalent to 6.4 billion yen ($78.3 million) last year.

The tie-up is on the heels of Toshiba’s acquisition of Swiss electronic-metering company Landis+Gyr AG for $2.3 billion in cash last May 18 to bolster its smart-grid operations. Renewable energy developers have been keen to use smart grids since they can handle the intermittent nature of electricity generated from wind or solar, in addition to having the ability to check energy use wirelessly in real-time.

With around 379 MW of installed capacity, GWEC said that wind energy in South Korea is still in its infancy, but a number of local manufacturers have invested more in the industry in response to Seoul’s growing appetite for offshore turbines.

Among them, Hyundai Heavy Industry seems to have the widest model choice out on the market. It currently manufactures 1.65-MW, 2-MW and 2.5-MW turbines for onshore use. It also announced last April 14 that it will complete a working 5.5-MW offshore wind turbine prototype by the end of the year.

The Korean government has set an ambitious strategy for offshore wind power development last year, planning to attract investments worth $8.2 billion to develop 2.5 GW worth of offshore wind farms over the next nine years.

The government is aiming to set up a private-public partnership to install 100 MW of wind projects operational by 2013, a further 900 MW by 2016, and the final 1.5 GW by 2016. In addition, local governments will add a further 4.5 GW of offshore wind projects.

All said, Korea plans to have 23 GW of wind power by 2030. Producing around 50 terawatt hours, the Korean Wind Energy Industry Association estimates that this will account for 10 percent of the country’s total energy demand, currently comprised mainly of nuclear, coal, and natural gas.