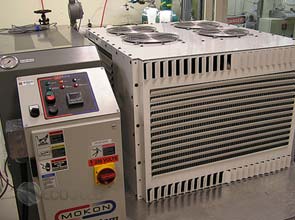 Engineers at the Oregon State University have developed a prototype device that captures waste heat from cars, factories, and power plants and uses it for cooling systems or electricity generation.

“This could become a very important new energy source and way to improve energy efficiency,” said Hailei Wang, a research associate in the School of Mechanical, Industrial and Manufacturing Engineering at the university.

The new technology, called a thermally activated cooling system, captures and uses low-to-medium grade heat. The researchers boast that their technology is more successful than other attempts to capture and use heat to produce cooling.

The current prototype was able to convert 80 percent of every kilowatt of waste heat into a kilowatt of cooling capability.

The researchers said that the system could also be used to produce electricity. However, the conversion efficiency would not be nearly as high in the production of electricity which would only be about 15 to 20 percent.

Scientists on the other hand noted that it is still better than the current choice, which is to waste the energy potential.

The technology makes use of a vapor compression cycle, which is usually used for a refrigeration circuit, with an organic Rankine cycle that converts water to steam, then back to water. The system uses small microchannels which help to better meet performance, size, and weight challenges.

In their tests, they used hot oil with a temperature of up to 200 degrees Celsius for simulation. They tested out their technology, against two conventional plate heat exchangers to determine the heat transfer effectiveness of the system which determines the conversion efficiency of such technology.

The result was that their innovation displayed a significantly higher conversion efficiency compared to the conventional heat plate exchangers’ output.

Mr. Wang said that their technology would be especially useful if there’s a need to have cooling systems where heat is being wasted.

“That’s one reason the research has been supported by the Department of Defense, because they see it being used to provide needed air conditioning for electronics and other purposes when they are using generators in the field,” he explained.

The scientists said that their technology could also be incorporated into alternative energy technologies, such as solar or geothermal, in addition to the heat coming from the use of fossil fuel.

More than half of heat generated by industrial activities is water, while advanced electrical power plants convert only 40 percent of the energy produced into electricity, Mr. Wang said.