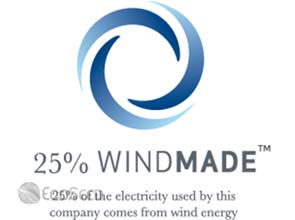 United States wind energy groups and an international group of wind power companies have finally revealed the standards companies vying for the WindMade label must observe so they can communicate their commitment in using wind power to consumers.

Standards for the WindMade company label made its United States debut in New York City on June 15, which the industry celebrates as Global Wind Day.

The WindMade label is being designed to apply to either companies or products. For now, the standards are for companies, telling the public either how much electricity from wind energy was used by them to create their products or to power its operations.

Companies will have to get at least 25 percent of its energy from wind power. It can achieve this in three ways – building a wind facility on site, signing a long-term power purchase agreement with a wind project, or purchasing Renewable Energy Certificates from certified wind projects. The label is renewed every year and is verified by a registered third party.

These and other details which make up the technical standard now enter a two-month public consultation period. A final version of the standard is expected to be announced in September.

Companies that would be able to use the label could show that 25 percent of their power needs came from wind energy or how big its wind energy use is from a mix of renewable energy sources.

On the consumer end, the WindMade label gives buyers an opportunity to support companies that have committed to use cleaner energy sources.

Once the label for products are available, it also gives consumers the choice of buying products made with clean wind power instead of fossil fuels, choices the industry hopes will lead to a greater demand for wind.

Experts at the W.W.F, American Wind Energy Association, Lego, Climate Friendly, Gold Standard and Vestas developed the standard, with Öko-Institut and PricewaterhouseCoopers acting as advisers. The technical guide for getting the WindMade certification went through a review board that included companies such as Wal-Mart, Better Place and Dong Energy.

“We believe that the label will build a bridge between consumers and companies committed to clean energy,” Steve Sawyer, chairman of the WindMade board and the secretary-general of G.W.E.C., said in a statement.

In an interview with EcoSeed after WindMade’s launch, Helle Jorgensen, sustainability advisory leader for PricewaterhouseCoopers, said the world’s corporations would have all the reason to be part of the labeling trend.

She said a globally recognized consumer label will enable companies to communicate their commitment to being green with their consumers more straightforwardly.

“Today there is no global label focusing on a single source of energy – and we need to start somewhere,” Ms. Jorgensen said in January. “Wind is an excellent starting point because of the combination of low emission, widespread availability and cost competitiveness.”

A global survey cited in January found that 92 percent of more than 25,000 consumers across 20 markets believe renewable energy is a good solution to slow down climate change.

If presented with a choice, most of them also said they would prefer products specifically made with wind energy, even at a premium according to the WindMade group, citing a TNS Gallup survey published in June 2010.