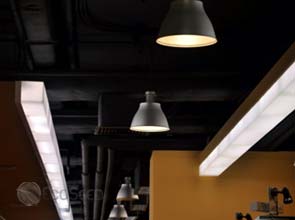 The California-based startup’s lighting management system involves installing a device designed to individually measure and manage energy use at each light fixture where it is installed. Control units on the device can dim or turn on/off lights based on ambient light and temperature data picked up by its sensors.

The whole system can also communicate directly with a power utility to accommodate manual or automatic demand response technology, a tool utilities use to control their customers’ electricity use in response to supply conditions.

Real-time and historic environmental data from the device can also be plugged into existing building automation systems to aid in managing heating and cooling- another known energy hog.

Exact details behind the system are largely still under wraps, with its website still under construction. But Enlighted said in a press release published yesterday that the system is wireless.

Because of the improved management and controls, the system can cut energy consumption from lighting in office and commercial buildings by 50 to 75 percent with a return on investment of just 18 months, according to Enlighted.

The company’s first customer is carpet company Interface Services, which used Enlighted’s system for its 35,000 square foot facility located in Acworth, Georgia. Around 150 individual lighting fixtures had a device installed and, according to Pieter van der Toorn, president of Interface Services, have been able to reduce overall lighting costs by approximately 69 percent with a payback period as stated by the company.

Trae Vasallo, a partner from Kleiner Perkins, said that «buildings represent one of the single largest opportunities for energy savings and intelligent lighting is the best place to start.» Tushar Dave, chairman of Enlighted, agrees, saying that most building standing today have barely addressed lighting energy use.

«Lighting consumes 25 to 40 percent of commercial office building electricity and is a major factor in worker comfort and productivity, yet more than ninety percent of existing buildings have little more than a wall switch,» said Mr. Tushar Dave.

«We’ve created what we believe to be the simplest, most cost effective advanced lighting control system on the market,» he added.

Mr Vasallo found the product’s relatively short return on investment and ease of installation as strong reasons backing up their decision to invest in Enlighted.

«Enlighted’s solution caught our attention because of its strong ROI and its simplicity. Installation is as easy as changing a light bulb and because Enlighted doesn’t change any existing wiring, there is no risk to mission critical infrastructure.

There are already companies offering lighting management and controls for commercial customers that are looking for cost-effective ways to cut down money and energy wasted. Lighting accounts for about 35 percent of electricity use in commercial buildings, according to the EPA.

Their systems can also accept demand response commands from utilities and collect energy use and carbon footprint data different from Enlighted. Adura system’s proposed energy savings range from 40 to 70 percent while Daintree’s is at 70 percent and did not give a range.