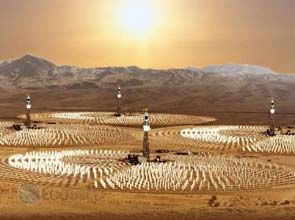 The solar-thermal system developed utilizes vast arrays of mirrors onto a single point atop a central tower which stands several hundred feet tall.

Researchers at the University of Colorado Boulder have developed a solar-thermal system which uses sunlight to split water into hydrogen and oxygen, allowing the hydrogen to be used for clean fuel.

The solar-thermal system developed utilizes vast arrays of mirrors onto a single point atop a central tower which stands several hundred feet tall. The heat generated by the mirrors, which can reach – 1,350 degrees Celsius – is then delivered into a reactor containing chemical compounds known as metal oxides.

When the chemical compound heats up, it releases oxygen atoms, changing its material composition and causing the newly formed compound to seek out new oxygen atoms. The oxygen from water molecules in the reactor will adhere to the surface of the metal oxide, which will free up the hydrogen molecules for collection as hydrogen gas.

“We have designed something there that is very different from other methods and frankly something that nobody thought was possible before. Splitting water with sunlight is the Holy Grail of a sustainable hydrogen economy,” said research group leader Professor Alan Weimer of the chemical and biological engineering department.

Co-lead author Charles Musgrave pointed out that the difference between their method and other methods developed is the ability to conduct two chemical reactions at the same temperature.

“The more conventional approaches require the control of both the switching of the temperature in the reactor from a hot to a cool state and the introduction of steam into the system. One of the big innovations in our system is that there is no swing in the temperature. The whole process is driven by either turning a steam valve on or off,” Assoc. Prof. Musgrave said.

Another advantage that the researchers see with their one step method is the speed in which it splits water, as conventional methods waste both time and heat.

The researcher was supported by the National Science Foundation and by the U.S. Department of Energy. – EcoSeed staff