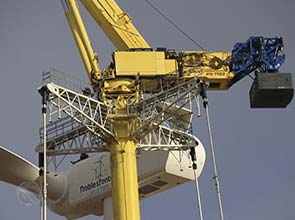 Iberdrola has completed two wind farms and a photovoltaic power plant in South Africa. These three are the Spanish electric company’s first renewable energy projects in the country.

The two wind farms and the PV power plant were built by a subsidiary of Iberdrola in a consortium with South African firm Group Five.

All in all, the three renewable energy projects have a combined capacity of 200 megawatts, which is enough power to supply the demand of around 150,000 South African homes and prevent the emission of approximately 300,000 tonnes of carbon dioxide yearly.

One of the wind farms, the Noblesfontein facility has a total capacity of 74 MW, consisting of 41 Vestas V100 model wind turbines that are rated at 1.8 MW each. It includes a substation and the power line needed to upload the energy to the grid.

Located in the Northern Cape Province, it is built on a turnkey basis. It was awarded in a contract worth $151 million by a consortium formed by Spanish firm Gestamp Wind and two South African partners, Shanduka and Sarge.

The Klipheuwel wind farm is located close to the town of Caledon in the Western Cape, and has a capacity of 27 MW. Developed by Iberdrola and Group Five, it also features the participation of Chinese firm Sinovel, which supplied nine wind turbines for the park, particularly, SL3000 models that are rated at 3 MW each.

The tender procedure for the wind farms were under the first round of the Renewable Energies Program that is run by the South African Energy Department, which aims to boost the generation of electricity using renewable sources.

The Renewable Energies Program expects to award contracts for a total capacity of 3,725 MW, involving various renewable energies in five different rounds. The South African Government has announced its intention to launch another renewable program after the current one is over, adding another 3,200 MW to the grind by 2020.

Meanwhile, the 96 MW Jasper PV power plant which is the largest in Africa, is nearing completion. Iberdrola and Group Five have been working together on the project after being chosen by the Jasper Power Company and signing a contract worth approximately $163 million. – EcoSeed Staff