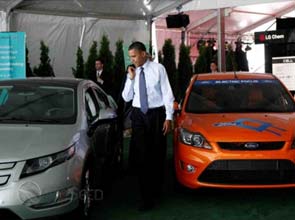 United States President Barack Obama attended on Thursday the groundbreaking of an electric vehicle battery manufacturing plant which he said will boost jobs and help the country become more competitive in the E.V. battery market.

The factory in Holland is owned by Contact Power Inc., a subsidiary of South Korea’s LG Chem Limited. It will be the ninth advanced battery factory to start construction as a result of $2.4 billion in stimulus funding that the government allotted to electric vehicle technologies.

Contact Power will receive about $150 million in loans to complete the $300-million factory that will manufacture lithium-ion batteries to power the much-awaited Chevrolet Volt of General Motors and the electric Ford Focus of Ford Motor Company.

Scheduled for completion in 2012, the plant will produce enough battery cells for up to 250,000 vehicles and help ease rising unemployment in Michigan by creating around 300 jobs during construction and another 300 when it is fully operational.

“These aren’t just any jobs. These are jobs in the industries of the future,” he remarked.

Mr. Obama said the state considerably suffered when the recession hit and the electric car industry – to which United States automakers based in Michigan are turning – is a bright spot for investment to revive the local and national economy.

“Michigan was hit harder than anywhere else. And on top of this recession, you were also rocked by the near collapse of the domestic auto industry,” Mr. Obama said.

«It’s clearly going to have an impact if we have a whole new sector added to our economy – 62,000 people working in that sector over the next decade, and that’s significant,» Ms. Granholm was quoted by the ABC news network as saying.

«It’s not the only answer, but it’s certainly a significant one. And it wouldn’t have happened but for the incentives that were put on the table through the recovery act,” she said.

Michigan is the largest recipient of the electric battery grants, with around $1.4 billion.

Supporting electric transportation has been a central part of Mr. Obama’s 2008 campaign for a transition to a clean energy economy. As part of his goal, he pledged to put one million plug-in hybrid E.V.’s on the country’s roads by 2015.

Coinciding with the president’s visit, the Department of Energy released a report outlining how federal stimulus funds have helped accelerate the development of battery and electric vehicle manufacturing processes.

The report argues that investments from the Recovery Act could increase the country’s production of lithium-ion batteries from 2 percent to 20 percent of the world’s supply by 2012 and up to 40 percent by 2015.

Mr. Obama said shoring up production in the United States will show that manufacturing jobs can prosper in the country in spite of cheaper labor costs abroad.

Mr. Obama said that having battery factories locally can drive battery costs down by nearly 70 percent in the next few years, making alternative vehicles more affordable and attractive to the domestic market.

The report also states that federal grants are funding 20 research projects that are finding ways to slash battery costs further by as much as 90 percent and expand vehicle range by threefold to sixfold.