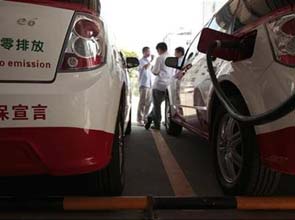 The Chinese government is said to be looking to prepare at least 10 million car parking spots for electric vehicles by 2020 in a new comprehensive policy due to be announced soon, a top executive at a local automaker said on Thursday.

China relies on foreign oil for more than half of its oil consumption and is looking to promote alternative fuel vehicles in the world’s biggest auto market, whose growth topped 30 percent last year to 18 million units.

«The government is working on a plan – and I think it will be announced very, very soon – and is basically calling for having, in 10 years, electric car parks of 10 million (units) or above,» Wang Dazong, president of Beijing Automotive Industry Holding Co (BAIC), told an industry conference on the sidelines of the Detroit auto show.

Another industry executive said Beijing is expected to focus its efforts most on pure electric vehicles, as opposed to gasoline-electric hybrids or hydrogen fuel-cell vehicles.

Automakers from BAIC to Volkswagen AG, General Motors Co and China’s Geely are all looking to tap what looks set to become a huge market for battery-powered electric vehicles, with some global automakers already announcing a timeline for producing them locally in China.

China’s Minister of Science and Technology was quoted by state-owned Xinhua news agency in October as saying the country’s production of electric vehicles could reach 1 million units by 2020, when many expect a total new-vehicle market of 40 million.

Mr. Wang said BAIC expects its own ratio of electric cars to be around 5 percent by 2020, which he said is among the most aggressive projections.

To support the electrification of cars, China is also looking to cut back on coal, the cheapest but dirtiest fossil fuel. It has already launched a major drive into hydropower and, to a lesser extent, wind, gas and nuclear power to supplement the coal sector, which provides about 70 percent of China’s electricity.

The government is due to unveil a new alternative energy plan within months to raise its targets for power generating capacity from such sources by 2020. China is planning to invest up to $1.5 trillion over five years in seven strategic industries, sources have said.

Beijing had come under criticism from the auto industry late last year for crafting a policy draft that would have required foreign automakers to produce at least one of the three core, high-tech components of electric vehicles in order to qualify for incentives in China.

Mr. Wang said that requirement has since been dropped from the policy outline given its controversial nature.

«Now, if a company wants to produce and sell electric cars in China, they are free,» the other industry executive said.