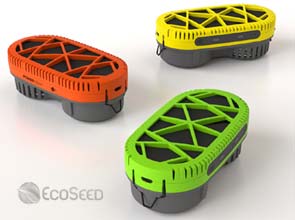 Sodium, silicon from salt, and sand are the key ingredients to a new portable hydrogen fuel cell charger for electronic equipment like laptops and mobile phones, cameras, and G.P.S. devices.

Adding water – any type of water including salt water – to the PowerTrekk’s H2 cartridge causes a chemical reaction that produces hydrogen which is converted into electricity with the only by-product being a little water vapor.

The key to this reaction is sodium silicide, which Mr. Dye previously used to fuel electric bicycles before being approached by SiGNa.

“In our lab, we were able to produce alkali metal silicides, which are basically made from sodium and silicon,” explained Mr. Dye, also a co-founder of SiGNa.

“By adding water to sodium silicide, we’re able to produce hydrogen, which creates energy for fuel cells. The byproduct, sodium silicate, is also green. It’s the same stuff found in toothpaste,” he added.

“SiGNa has created an inherently-safe solution to produce electric power, resulting in an eco-friendly and cost-effective portable solution,” he added.

The PowerTrekk acts as both battery pack and fuel cell, operating as a ready source of power, which enables instant charging without needing a wall charge. Its cartridge, called the PowerPukk, is said to be able to fully charge a smart phone’s battery.

The PowerTrekk is expected to be shipped internationally in October for an estimated $200 each. It will come in either five or ten packs with a shelf life of two years.