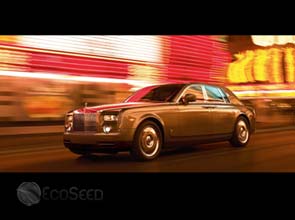 British luxury vehicle manufacturer Rolls-Royce Motor Cars is entering the electrical vehicle market with the announcement of the set debut of their electric powered Phantom on March.

The Phantom, a saloon automobile model launched in 2003, was the first model from Rolls-Royce Motor Cars since they became a subsidiary of the German BMW Group. The new model, dubbed the 102EX or the Phantom Experimental Electric will be a one-off, fully-electric vehicle, and is set to debut at the Geneva Motor Show on March 1.

“With this vehicle, we begin an exploration into alternative drive-trains, seeking clarity on which alternative technologies may be suitable to drive Rolls-Royce motor cars of the future,” said Mr. Müller-Ötvös.

The Phantom EE will serve as a working test bed for a global tour that will include Europe, the Middle East, Asia, and North America in 2011. Through test drives, the company will gather opinions and reactions to alternative drive-train options from a range of stakeholders including owners, enthusiasts, members of the public, and the media.

Currently, there are no plans to develop a production version, but the company believes that the model will serve as an invaluable tool to gauge potential market that such a luxury vehicle might have as well as answer important questions as to Rolls-Royce Motor Cars’ ability to incorporate future green alternative technologies into their vehicle offerings.

“It must be a technology that is right for our customers, our brand and which sets us on a sound footing for a sustainable future,” stressed Mr. Müller-Ötvös.