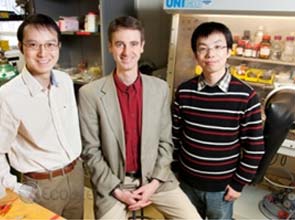 Researchers at the University of Illinois developed a battery that allows for faster charging and discharging without sacrificing energy storage capacity. The team, led by materials science and engineering professor Paul Braun, did it by making the active material in the battery a thin film.

The improvement owes to a new way of assembling the nanostructure. The process resulted in a bicontinuous electrode structure with small interconnects, a thin-film active material and a metal framework with good electrical conductivity.

Professor Braun and his team have reportedly demonstrated battery electrodes that can charge or discharge in a few seconds, 10 to 100 times faster than equivalent bulk electrodes, yet can perform normally in existing devices.

“If you had the ability to charge rapidly, instead of taking hours to charge the [electric] vehicle you could potentially have vehicles that would charge in similar times as needed to refuel a car with gasoline,” Professor Braun said. “If you had five-minute charge capability, you would think of this the same way you do an internal combustion engine. You would just pull up to a charging station and fill up.”