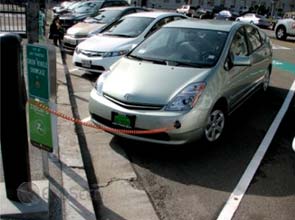 Zipcar, Inc., said to be the United States’ largest car sharing network, expects to raise up to $132.8 million on its market debut in Nasdaq. The company, which operates a car sharing business, plans to sell 8.3 million shares at $14 to $16 each, according to a March 30 Securities and Exchange Commission filing.

At $132 million, the estimated gain is slightly above the original planned $75 million I.P.O. announced in June 2010.

The company is expected to trade on Nasdaq under the symbol «ZIP.”

In the S.E.C. filing, Zipcar said it will use the proceeds of the I.P.O. to repay $45.8 million in debt, including notes, and paying $5 million to former shareholders of Streetcar, a London-based car sharing company that Zipcar acquired last year. The rest will be used to expand the business.

According to Zipcar, each car in its fleet takes 15 to 20 personally owned vehicles off the road and each of its members saves 219 gallons of gas per year by joining the service rather than owning a car.

The company said car sharing is a growing trend, with upwards of 10 percent of the United State’s population expected to eventually adopt car sharing as their primary mode of transportation.

Aside from reducing personal vehicle use, car sharing companies like Zipcar can serve as an early testing ground for cleaner vehicles.

Zipcar got eight cars, which it distributed to Boston, Cambridge, San Francisco and Portland, where charging stations that support the plug-in Prius have already been installed. Members can use the Prius for $7 per hour.

Running a car sharing service is expensive business which demands a lot of capital. Maintaining the fleet and buying new cars, for instance, can easily take up a large portion of capital and sales.

“We expect to incur a net loss in 2011. We do not know if our business operations will become profitable or if we will continue to incur net losses in 2012 and beyond,” the company said in its filing.

The success of car sharing in terms of getting more people to participate and attracting investment remains to be seen, but analysts expect the market will grow.

While most of Zipcar’s major stakeholders’ have focused primarily on companies in the consumer, software, infrastructure and semiconductor sectors, some of them also have invested in companies in the green industry before.

Primarily supporting companies like Twitter, Red Hat and Ebay, Benchmark Capital invested in Nanosolar, a California-based start-up that developed a way to print the semi-conductor materials that capture light onto solar cells to make manufacturing cheaper.

Greylock, one of the oldest venture capital firms founded in 1965, made notable investments it made in the green industry back in 2008 when it joined a $131 million financing round of Sun Edison L.L.C., North America’s largest solar energy provider, and a $2 million round in Israel-based EnStorage, which is developing regenerative fuel cells for energy storage.