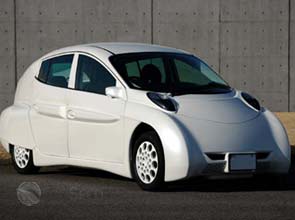 SIM-Drive Corporation has developed an electric vehicle that uses in-wheel electric motor technology. SIM-Drive is calling the vehicle SIM-L.E.I., which stands for Leading Efficiency In-Wheel motor. The announcement of the completion of the prototype model was released on March 29. The company also announced that it is planning to mass produce the E.V. by 2013.

While traditional cars, including most E.V.’s, have their motors under the hood, the SIM-L.E.I. is powered by small electric motors mounted in the individual wheel housings behind the tires.

Rather than using a drive shaft, the small motors directly drive the wheels, making them more efficient than the traditional design of vehicles, said the company.

The four-wheel drive E.V., roughly the size of a sedan, can travel 333 kilometers on a single charge. Its alternating current electrical power consumption rate is 77 Wh/km, equivalent to 70 km/L of the fuel efficiency rate with gasoline as the energy consumption rate.

The engineers of the company placed the EV’s batteries and inverters under the floorboards rather than the conventional design of placing them in either trunk. This was done to bring the batteries in closer proximity with the in-wheel motors.

SIM-L.E.I. also features an all-steel monocoque to reduce its body weight, super low rolling friction resistance tires, and a super low air drag body design. These features and its in-wheel motor design permits it to achieve a zero to 100 standing start acceleration time of only 4.8 seconds.

The company also boasted that each of the motors can be fitted with sensors, enabling almost instantaneous responsiveness to road conditions.

SIM-Drive Corporation is a Japanese consortium based in Kawasaki-shi and established in 2009. Consisting of 34 companies and municipalities, it focuses on research and development of electric vehicles.

The only vehicle to have a design close to that of SIM-Drive’s E.V. was constructed by the University of Michigan. The Infininum was a solar car that featured an in-wheel electric motor similar to SIM-L.E.I.

The solar car was used to compete against 50 other teams in a six-day competition called the Global Green Challenge that was held October 2009.