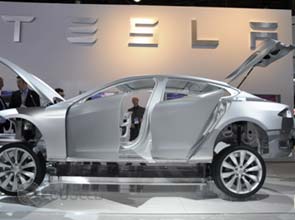 Tesla Motors Inc. said its revenue more than doubled in the first quarter on sales of battery packs for electric vehicles, but profitability remained elusive as losses grew sharply attributed to costs of developing its new electric vehicle.

The Palo Alto, California-based company reported revenues of $49 million in the first quarter, more than double the $20.8 million posted a year earlier as it delivered a record number of battery packs and chargers for Daimler’s electric Smart Fortwo and A-class vehicles for the fourth straight quarter.

Daimler increased its total orders for Smart Fortwo electric drive components from 1,800 sets to 2,100 sets, to be delivered before yearend.

Component orders for Toyota’s RAV 4 E.V. also accounted for the revenue hike as Tesla collaborates in developing a powertrain due out next year. The powertrain includes a battery, power electronics components, motor and gearbox, including proprietary software.

Revenue from development services also jumped to $15.4 million from just $227,000 a year earlier.

“We now project that full-year revenue will be between $170 to $185 million, up from our previous guidance of $160 million to $175 million,” Deepak Ahuja, Tesla’s chief financial officer, said in a conference call.

All bets on Model S

However, Tesla’s net loss widened to $48.9 million from $29.5 million a year earlier, possibly from increased spending on the factory that will manufacture its Model S sedan, its first mass market electric vehicle.

Tesla said in its 2010 financial report in February that it spent over $17 million on manufacturing equipment and spare parts to revive Toyota’s former car factory in Fremont, California.

The Nummi plant will be the main manufacturing facility of the Model S and a planned crossover vehicle called Model X whose details are yet to be revealed.

Mr. Ahuja said the company plans to spend as much as $215 million for the rest of year to have the facility start producing the Model S.

Tesla chief executive Elon Musk said 600 customers have reserved a Model S since the end of April, requiring a minimum $5,000 deposit. A version of the car with a 300-mile battery will start delivery in mid-2012.

The Model S is undergoing testing for safety, noise, weather, and handling. Robots and automation equipment for paint and plastic stamping are expected to be installed this year at the Nummi factory.

With profit still out of arm’s length for the past quarters, Mr. Musk said in February he was pinning his hopes of recovery from these losses with the upcoming Model S. At around $50,000, it’s roughly half the price of the company’s flagship Roadster, which could allow more consumers to consider the Tesla brand and boost sales.

More than 1,650 Roadsters have been delivered internationally and are expected to sell out by the end of the year, according to Tesla.

The company gets its nickel-based lithium-ion battery cells designed specifically for electric vehicles from Panasonic Corporation, which bought a 2 percent stake in Tesla in November.

Mr. Musk said that it did not have major supply disruptions from the earthquake and tsunami that struck Japan in March.