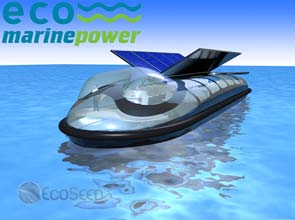 Tonbo, which means dragonfly in Japanese, has its 140 watt-solar modules mounted on the vessel on a wing-like manner. It will also feature lithium batteries that can be fully charged within two to four hours. These batteries, which can be charged by the solar modules, will enable the vessel to run on an all-electric mode.

The solar modules can be lowered so that the vessel can pass under low bridges or adjusted so that they can take full advantage of the available solar energy.

The solar-electric vessel can accommodate 200 to 250 passengers, and will run on a cruising speed of 10 knots. They plan to build the vessel from lightweight marine grade aluminum.

“We are also looking at some sort of end of life disposal scheme where our company would help recycle the vessel when it has reached the end of its service life,” Eco Marine’s director, Greg Atkinson told EcoSeed.

The company is currently completing its design, and at the same time, looking for suppliers and investors for construction before hitting the market. Mr. Atkinson added that they are also looking for a shipyard for their vessel.

“We are looking to have the Tonbo on the market next year,” Mr. Atkinson said.

The director explained that part of their goals in launching the eco-friendly vessel is changing attitudes – to push shipping towards using renewable energy. Through this, Mr. Atkinson said they also wish to promote construction of eco-friendly vessels.

Eco Marine’s Aquarius system, an array of rigid but movable sails to collect wind and solar energy which are positioned by a computer system, is currently being studied to expand its use.

The Aquarius system will have installed solar power of around 300 to 400 kW along with its sails that may help move the ship just as a sail does. The energy collected by the solar panels can either be stored in batteries or directly power the ship’s systems.

Through the study, they aim to further expand their concepts and energy propulsion systems for ships, Mr. Atkinson said.

“What we are doing is expand on our Aquarius work and start looking at how we could bring in a range of additional wind or solar power technologies onto a ship specifically designed to use these technologies,” he explained.

Meanwhile, the company is studying a range of sail designs which will work best for their system.

The company is also considering how Tonbo and their Medaka solar ferry’s design can be incorporated into a large ship.

Eco Marine earlier reported that the system is scheduled to be ready for initial testing in early 2012.

“It should be possible to have a commercial system ready by 2013,” Mr. Atkinson said.

However, he pointed out that its availability still depends on the progress their prototype achieves in its sea trials.