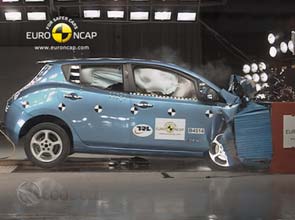 The European New Car Assessment Program gave a five-star safety rating to the Nissan Leaf, reportedly the first all-electric vehicle to receive such according the organization.

The Nissan Leaf earned an 89 percent rating for adult safety, 83 percent for child protection and 84 percent for its on-board safety assist systems. The latter includes electronic stability control which automatically applies the breaks when it detects a loss of steering control. It also earned 65 percent score for pedestrian safety.

The safety assessment done on the vehicle followed standard Euro N.C.A.P. procedure, with tests for frontal impact, side impact, side pole impact and whiplash.

The electric car’s 48 lithium-ion battery modules, which are housed in a special compartment beneath the floor, withstood all the impact tests, keeping occupants and ensuring that the risks of battery damage or high voltage leaking are reduced to zero.

The battery system was switched on during the crash simulations to test the safety measures of the electrical system, which includes automatic cut-off isolation in the event of an accident.

“The Nissan Leaf proves that E.V.’s can be equally safe as common cars. The standard is now set for the next generation of cars on the European market,” Euro N.C.A.P.’s secretary general Michiel van Ratingen said.

The Nissan Leaf was safety ratings last month by the United States Insurance Institute for Highway Safety, along with General Motor’s Chevrolet Volt.

The Nissan Leaf and the Chevrolet Volt was recognized for having “state-of-the-art” crash protection, after being given with a good rating on several crash protection tests.

The Leaf’s 3,760-pound battery pack provided an advantage for having more weight, a factor in making the vehicle safer.