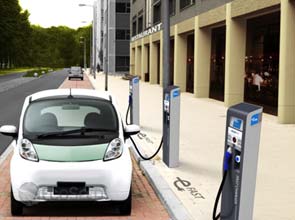 ABB said the deal will help the company reach more customers worldwide and gain access to Epyon’s technology. Ulrich Spiesshofer, head of ABB’s discrete automation and motion division said his company is banking on Epyon’s expertise in fast E.V. chargers and the software it uses to manage them.

Epyon said its direct current fast-charging stations were designed to have up to 250 kilowatts of charging power which is able to charge an electric car battery at around 15 to 30 minutes compared with 6 to 8 hours using a standard alternating current charger outlet. Its chargers have been in commercial use since May 2010.

In comparison ABB’s version of DC fast charge stations are capable of providing a charge of up to 100 kilowatts. Depending on battery and vehicle type, the charger can fill an E.V.’s battery with 100 kilometers’ worth of power in less than 10 minutes.

Epyon’s chargers also use networking software to economize on and optimize how cars are charged. The network communicates with the Epyon battery knowledge center to determine the rate of charge most favorable to battery life, while choosing a charging time that coincides with a low electricity tariff.

The San Francisco-based E.V. charging and energy storage company received $10 million from ABB to fund the EV Project, a program that will install more than 15,000 chargers and deploy 8,300 electric vehicles in 16 major American cities funded by a $115 million grant from the United States Department of Energy.

In September last year, ABB was also picked to build China’s largest ever electric vehicle charging station project at the Shenzhen Universiade Center. The project can serve taxies, sedans and buses, with space for six electric vehicles charging at the same time and a total charging capacity of 1,890 kW. It covers 1,092 square meters and costs 10 million yuan ($1.5 million).

It is the first time that ABB products have been deployed in an E.V. charging station project inside China. However, the company will only provide low voltage air circuit breakers and molded case breakers for the charging stations to be used.

Founded in 2005, Epyon is based in Rijswijk, the Netherlands, and has a research and development center in Eindhoven. It has also has offices Britain, Spain and the United States. The company’s 50 employees worldwide will join ABB when the acquisition is completed.

Rapid charging time is an important consideration among potential electric car consumers according to researchers from the University of Delaware. A report published in May said individuals would be willing to pay for more for every hour saved in charging time.

After surveying 3,000 Americans, the researchers found that consumers would be willing to pay an additional $3,250 premium per hour of charging time saved when buying an electric car capable of having 50 miles’ worth of charge on in 10 minutes from an external high-power charging station.

E.V. charging station sales are expected to multiply rapidly over the next five years and reach 1.6 million units globally by 2015, according to Pike Research.