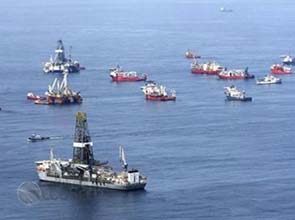 Passing the bill as the House leaves for its six-week recess gives lawmakers the opportunity to return home boasting they reined in Big Oil and held BP responsible for the worst offshore oil disaster in United States history.

The vote was 209-193 on the bill supported by President Barack Obama.

The Obama administration’s moratorium would end in November. By the time the full Congress completes action on this offshore drilling bill – and it is uncertain that it will – it could be November or later.

A similar offshore drilling bill is pending in the Senate, without the House’s new provision to end the drilling moratorium. But it was unlikely that measure would pass before that chamber begins its summer recess on August 6.

House Republicans warned the bill would slash United States oil and gas production in the Gulf of Mexico, a major supplier of domestic energy, and cut high-paying drilling jobs.

«The Obama moratorium on deepwater drilling has already costs thousands of jobs and this bill will eliminate even more American energy jobs, making it harder and more expensive to produce both energy on and offshore,» said Republican Representative Pete Sessions.

«It will drive American companies out of the Gulf,» said Republican Representative Kevin Brady. «This is a choice between American energy workers and foreign oil.»

Democrats said the bill would make offshore drilling safer for workers, while also protecting the environment and Gulf Coast business from future oil spills like the one caused by BP that damaged wetlands and hurt the region’s fishing and tourism industries.

«This legislation is about safety, about establishing new safety standards, safety for the workers on the rigs,» said House Speaker Nancy Pelosi.

«If you want to apologize for Big Oil, go right ahead, but the American people are not on your side on this one,» Democratic Representative Jim McGovern told his Republican colleagues during a long day of debate.

Before passing the bill, the House also approved an amendment to help smaller oil companies compete for Gulf of Mexico drilling projects under the proposed reforms. The amendment would let them pool their resources in demonstrating they have the financial resources to deal with potential oil spills.

The House vote on the bill was close, as several Democrats representing districts with strong oil industry interests joined Republicans in opposition.

Representative Gene Green, from the oil industry-dominated city of Houston, was one of those Democrats. «There are a lot of things in there that have nothing to do with safety of offshore drilling operations,” he told reporters.

A sticking point in the Senate is opposition from Republicans and some moderate Democrats to removing all liability limits oil companies would face for economic damages stemming from the BP disaster and any future spills.

Current law requires companies to only cover up to $75 million for damages to local economies. The BP spill could end up costing billions of dollars in lost tourism, fishing and other Gulf Coast revenues.

BP has said it would pay for all costs related to the spill, but many lawmakers worry that the company could put victims through years of litigation.

But Senate Democrats abandoned attempts to attach climate change provisions that would have set mandatory limits on some companies’ carbon dioxide emissions.

Senate leaders plan to hold a test vote next Wednesday to gauge support for the bill, according to a Democratic aide. But Republicans, and possibly some moderate Democrats, might block a full debate, forcing senators to take it up in September.

The House also approved a separate bill on Friday to give whistle-blower protection to workers who report violations in offshore drilling rules.