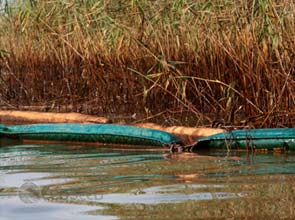 In one of the reports, researchers at the University of Georgia said about three-quarters of the oil from BP’s blown-out Macondo well was still lurking below the surface of the Gulf and may pose a threat to the ecosystem.

Charles Hopkinson, who helped lead the investigation, said up to 79 percent of the 4.1 million barrels of oil that gushed from the broken well and were not captured directly at the wellhead remained in the Gulf.

The report was based on an analysis of government estimates released on August 2 that Mr. Hopkinson said had been widely misinterpreted as meaning that 75 percent of the oil spewed by the well had either evaporated, dissolved or been otherwise contained, leaving only about 25 percent.

«The idea that 75 percent of the oil is gone and is of no further concern to the environment is just absolutely incorrect,» Mr. Hopkinson told reporters on a conference call.

Separately, a study released by University of South Florida scientists said experiments in the northeastern Gulf where so-called plumes or barely visible clouds of oil had been found earlier had turned up oil in sediments of an underwater canyon. The oil was at levels toxic to critical marine organisms.

Oil droplets were found in the sediments of the DeSoto Canyon, where nutrient-rich waters support spawning grounds of important fish species on the West Florida Shelf, this report said.

In a response to the University of Georgia report, a National Oceanic and Atmospheric Administration (NOAA) spokesman said the August 2 government calculation was based «on direct measurements whenever possible and the best available scientific estimates where direct measurements were not possible.»

«Additionally, the government and independent scientists involved in the oil budget have been clear that oil and its remnants left in the water represent a potential threat, which is why we continue to rigorously monitor, test and assess short- and long-term ramifications,» NOAA communications director Justin Kenney said in a statement.

For 87 days following the April 20 Deepwater Horizon rig explosion that triggered the oil spill, crude spewed into the Gulf, contaminating wetlands, fishing grounds and beaches from Louisiana to the Florida Panhandle. BP engineers provisionally capped the leak on July 15 and are working to permanently «kill» the well later this month.

NOAA head Jane Lubchenco told a White House briefing on August 4 that: «At least 50 percent of the oil that was released is now completely gone from the system. And most of the remainder is degrading rapidly or is being removed from the beaches.»

«There’s oil in the water»

But University of Georgia marine sciences professor Samantha Joye and other researchers have seen no scientific information to support that view.

«I have not seen data that leads me to conclude that 50 percent of the oil is gone,» Ms. Joye said.

«No one’s standing up here and saying ‘this is a doom and gloom scenario,’ but at the same time it’s not as straight forward as saying all the oil is gone either,» she said.

«What we’re trying to point out is the impacts of oil are still there. There’s oil in the water, there’s oil on the seafloor, there are going to be impacts on the system. We have to continue monitoring and evaluating what those impacts are.»

The University of South Florida researchers said their initial findings after a 10-day mission in the Gulf strongly suggested that oil from BP’s spill had settled on the seafloor further east than previously suspected, at levels toxic to marine life.

University oceanographer David Hollander said on a conference call he believed the government’s August 2 assessment «was a little bit premature from a scientific point of view.»

«Dispersed does not mean that it won’t have an impact,» he said, referring to the government estimates. But he stressed that the University of South Florida mission’s initial findings would need to be verified by more scientific testing.

President Barack Obama’s administration, which has been criticized for its handling of the catastrophic spill, is seeking to reassure skeptical Gulf Coast residents and the wider public that the worst of the emergency is over.

Mr. Obama, who took his family to Florida’s Panhandle Coast at the weekend to demonstrate that the beaches were clean and «open for business,» says the biggest environmental cleanup in United States history will not end until the last of the oil is gone.