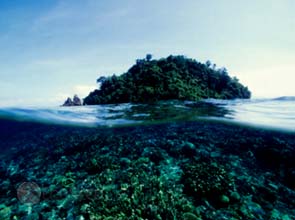 The changes could have dire consequences for hundreds of millions of people around the globe who rely on oceans for their livelihoods.

«It’s as if the earth has been smoking two packs of cigarettes a day», said the report’s lead-author Australian marine scientist Professor Ove Hoegh-Guldberg.

Oceans were rapidly warming and acidifying, water circulation was being altered and dead zones within the ocean depths were expanding, says the report.

There has also been a decline in major ocean ecosystems like kelp forests and coral reefs and the marine food chain was breaking down, with fewer and smaller fish and more frequent diseases and pests among marine organisms.

«If we continue down this pathway we get into conditions which have no analog to anything we’ve experienced,» said Hoegh-Guldberg, director of the Global Change Institute at the University of Queensland.

Mr. Hoegh-Guldberg said oceans were the earth’s «heart and lungs», producing half of the world’s oxygen and absorbing 30 percent of man-made carbon dioxide.

«We are entering a period in which the very ocean services upon which humanity depends are undergoing massive change and in some cases beginning to fail,» said Mr. Hoegh-Guldberg.

«Quite plainly, the earth cannot do without its ocean. This is further evidence that we are well on the way to the next great extinction event.»

More than 3.5 billion people depend on the ocean for their primary source of food and in 20 years this number could double, the report’s authors say.

The world’s climate has remained stable for several thousand years, but climate change in the past 150 years is now forcing organisms to change rapidly – changes that through evolution would normally take a long time, said the report.

«We are becoming increasingly certain that the world’s marine ecosystems are approaching tipping points. These tipping points are where change accelerates and causes unrelated impacts on other systems,» said co-author marine scientist John F. Bruno at the University of North Carolina.

Last week, the head of the United Nations Environment Programme, Achim Steiner, said it was crucial the world responded to the loss of coral reefs, forests and other ecosystems «that generate multitrillion dollar services that underpin all life-including economic life on earth.»