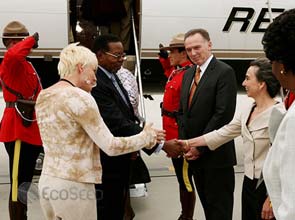 In the Muskoka Accountability Report, released ahead of G-8’s summit held in Muskoka, Canada from Friday to Saturday, the group said it has engaged in three funds addressing international climate goals, such as adaptation.

Adaptation refers to measures by which vulnerable countries, especially economically poorer ones, could prepare for the impact of climate change. Threats include rising seas, stronger rains and intensified droughts.

These funds are for least developed countries’ national adaptation action programs, for the promotion of longterm adaptation measures and for climate resilience in mainstream development planning.

The G-8 said around $180 million and $129 million have been collected for the least developed countries fund and the special climate change fund respectively. The latter reportedly mobilized voluntary contributions worth $110 million for adaptation and $19 million for technology transfer.

For the pilot program for climate resilience, the G-8 said it has pledged $1 billion and chosen as recipients nine countries in the Caribbean, Pacific and African regions.

“By working with like-minded partners, the G-8 has made a substantial contribution to progress on the Millennium Development Goals and other internationally agreed development objectives – all of which has made a significant difference in the lives of millions of people,” said Lawrence Cannon, Canadian minister of foreign affairs.

“But it’s not enough to make commitments – you have to follow through. And this report demonstrates the G-8’s effort to do its part and be accountable,” he said.