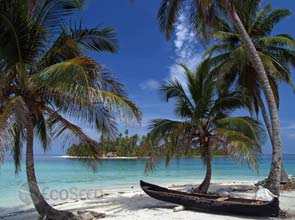 Seasonal winds, storms and high tides combine to submerge the tiny islands, crowded with huts of yellow cane and faded palm fronds, leaving them ankle-deep in emerald water for days on end.

Pablo Preciado, leader of the island of Carti Sugdub, remembers that in his childhood floods were rare, brief and barely wetted his toes. «Now it’s something else. It’s serious,» he said.

The increase of a few inches in flood depth is consistent with a global sea level rise over Mr. Preciado’s 64 years of life and has been made worse by coral mining by the islanders that reduced a buffer against the waves.

Carti Sugdub is one of a handful of islands in an archipelago off Panama’s northeastern coast, where the government says climate change threatens the livelihood of nearly half of the 32,000 semi-autonomous Kuna people.

The 2,000 inhabitants of Carti Sugdub plan to move to coastal areas within the Kuna’s autonomous territory on the Panama mainland. They are eyeing foothills a half-hour walk from the swampy beach areas.

«The water level is rising. The move is imminent,» said Mr. Preciado, who has been leading a group of villagers clearing tropical forest for the new settlement.

World leaders have failed so far to reach a global accord to curb the greenhouse gas emissions blamed for climate change. A United Nations climate change conference later this year in Mexico aims to make progress toward a binding agreement.

If the islanders abandon their homes as planned, the exodus will be one of the first blamed on rising sea levels and global warming.

Scientists warn that sea level rise in the next century could threaten millions with a similar fate and some communities as far apart as Papua New Guinea, Vanuatu and Fiji have already been forced to relocate.

«This is no longer about a scientist saying that climate change and the change in sea level will flood (a people) and affect them,» said Hector Guzman, a marine biologist and coral specialist at the Smithsonian Tropical Research Institute in Panama. «This is happening now in the real world.»

The fiercely independent Kuna, famed for rebellions against Spanish conquistadors, French pirates and Panamanian overlords, have accelerated their fate by mining coral, which they use to expand islands and build artificial islets and breakwaters.

Mr. Guzman, based at a Pacific island research center on the edge of Panama City, has warned of the risks of coral mining for a decade but says speaking out against a legally permitted traditional activity is «taboo.»

«(The Kuna) have increased their vulnerability to storms, wave action, and above all, the action of the rise in sea level,» he told Reuters.

When Kuna speak in their native language the Spanish words for «climate change» are often among the few foreign words used. While some elders warn that sea level rise will get worse, many locals believe God will keep them safe.

«I don’t know where they get that from – that the land is going to sink and we’d better leave before it happens … Those who want to go, can go. I’m staying here,» said Evangelina, 60, who would not give her last name because she hasn’t told local leadership she’s opposed to moving.

Sea levels rose about 17 centimeters (about 7 inches) over the last century and experts say the rate is accelerating. In 2007, the United Nations predicted a rise of 18 centimeters to 59 centimeters (7 inches to 23 inches) by 2100 but that did not include the accelerated melting of ice sheets in Antarctica and Greenland.

U.N. secretary general Ban Ki-moon has warned that seas could rise 2 meters (6.5 feet) by the end of the century, threatening millions of people in cities from Tokyo and Shanghai to New Orleans.

«It’s something you’re going to be seeing more and more,» said Albert Binger, the scientific adviser to the 42-member Alliance of Small Island States, referring to potential victims as «climate change refugees.»

Mr. Binger said the Kuna’s coral extraction is a portent for what climate change has in store for other low-lying islands protected by reefs. The greenhouse gas carbon dioxide makes oceans more acidic, killing coral struggling to survive in warmer seas.

While Kuna leaders say their move from cool breezy islands to stuffy forests is imminent, progress has been slow so far and the government does not have a support plan in place.

Carti Sugdub’s islanders have used machetes to carve out a patch of tropical forest but lack machinery to clear the land.

Leaders at nearby Carti Mulatupu are working on an environmental impact study for their move. They reckon setting up a mainland community for 600 people could cost $5 million.

The Panamanian government, which supports the islanders financially by paying for health clinics, schools and poverty programs, has done little to support the relocation plans but officials back the idea.

«Sometimes the community is flooded up to the knees,» said Helen Perez, the schoolmaster at Carti Mulatupu, as his 120 students ran around a sandy school yard by an eroded concrete pier. «The community has taken the decision to move to land.»

Chani Morris, an 82-year-old fisherman, is ready to abandon the islet of Coibita he helped build out of coral 33 years ago. He said he doesn’t sleep well since a flood engulfed the island, destroyed huts and carried away dugout canoes.

«The sea is very bothersome, sometimes it scares me at night,» said Mr. Morris, as he fashioned fish traps out of chicken wire. «I’m just waiting for the others to decide when we can move and I’m going to go with them.»