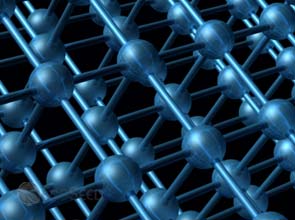 Scientists are hoping such materials can lead to cleaner energy and help capture heat-trapping carbon dioxide emissions before they reach the atmosphere and contribute to global warming, rising sea levels and ocean acidity.

Led by Omar Yaghi at the University of California, Los Angeles’ California NanoSystems Institute, the team improved upon an earlier crystal named MOF-177 to produce two new versions – MOF-200 and MOF-210 – that can store twice the volume of gases.

«Porosity is a way to do a lot with little,» said Mr. Yaghi, a chemistry and biochemistry professor, in a statement. «Instead of having only the outside surface of a particle, we drill small holes to dramatically increase the surface area.»

The improved crystals were described in a paper published in the online edition of the journal Science.

Jaheon Kim, a chemistry professor at Seoul’s Soongsil University, helped design the MOF-210. He described one gram of M.O.F.’s as being about the size of four sugar tablets.

When flattened, each gram of these improved crystals could spread over 5,000 square meters, Mr. Yaghi said.

«If I take a gram of MOF-200 and unravel it, it will cover many football fields, and that is the space you have for gases to assemble,» Mr. Yaghi said. «It’s like magic. Forty tons of M.O.F.’s is equal to the entire surface area of California.»

In an email exchange with Reuters, Mr. Kim said he saw many uses for these crystals.

«They can be used for the short-term storage of CO2 (carbon dioxide) or fuel gas storage. I think it is practically possible,» said Mr. Kim, adding that hydrogen could also be stored.

M.O.F.’ s can be made from low-cost ingredients, such as zinc oxide, a common ingredient in sunscreen, and terephthalate, which is found in plastic soda bottles.