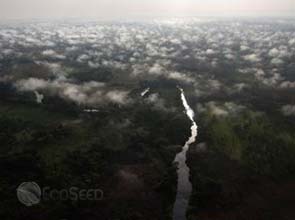 From their wooden shacks and unpainted concrete houses by motorways on the edge of Banco National Park, the millions who live in north Abidjan need no lesson on its worth.

«This forest is a great thing,» said textile worker Sebastien Coulibaly, 35, in front of the sky-scraping green mass of vines and broccoli-shaped trees.

«It helps us to breathe better – we live at ease because of it. Sometimes we walk our children there. We must protect it, because our planet will be nothing without forests.»

Logging, farming and armed conflict still threaten Africa’s jungles, which include the Congo Basin, the world’s second largest after the Amazon, but analysts are hopeful.

A new global study on illegal logging by London’s Chatham House think-tank on Wednesday found that it had halved in Cameroon, once one of the worst sources of illicit timber, since 2002, a decline of twice the global average.

Earlier this year the European Union signed deals with Ghana, Cameroon and Congo Republic to tighten restrictions on logging, ahead of an E.U. ban on illegally harvested timber that was passed this month and takes effect in 2012.

Logging bans don’t directly address forest loss from other threats such as agriculture, but officials are hoping that a potential money spinner – carbon offsets – will.

A United Nations scheme to reduce emissions from deforestation or degradation (REDD) has enabled Indonesia, which houses the world’s third biggest forest but is being deforested by palm oil and timber firms, to get $1 billion from Norway in May to revoke those firms’ forestry licenses.

Deforestation makes up a fifth of world carbon dioxide emissions and the REDD fund is worth a total of $4 billion so far.

Unlike Asia, African states have been slow to capitalize on climate aid – they account for 2 percent of developing nation carbon projects. But many hope to change that.

An African Development Bank fund was established in 2008 for the Congo basin, a forest of half a billion acres (200 million hectares) spanning nine countries and storing, the bank says, 25 billion to 30 billion metric tons of carbon, which currently trades at 14 euros ($18.06) per metric ton in Europe.

«Expectations are extremely high that this will allow us to preserve the forest, restore what’s been degraded and pay these countries for their ecological services,» Patrice Wadja, the fund’s operations officer, told Reuters.

Gabon’s President Ali Bongo seeks to be first in line. He has banned raw wood exports and in May set up a climate council that must come up with a REDD plan for the 80 percent of its original forest that remains before December’s climate talks in Cancun.

Despite the challenges, experts think Africa’s forests have at least as good a chance as Brazil or Indonesia.

The rate of forest destruction is generally slower: 0.16 percent a year in the Congo Basin, compared with 11 percent in Indonesia, Mr. Wadja said, because Central Africa has been largely spared large-scale clearing for agriculture.

West Africa’s deforestation is much higher, driven by logging and clearing to plant cash crops, especially cocoa, a topic so sensitive that Reuters could not get permission to visit some forests in top grower Ivory Coast.

«At independence, we had 16 million hectares of forest. We today have 6 million – the lost area is now all farms,» said Ivorian forest and water technician Yamani Soro.

Improving yields with fertilizer and pesticides is key, although reforms have been blocked by Ivory Coast’s post-civil war political crisis.

Drier nations in the semi-desert Sahel belt with scant forest are meanwhile planning to plant trees. Presidents from Senegal to Djibouti agreed in Chad last month to build a «green wall» thousands of miles long with I.M.F. funds.

But even as Africa curbs illicit logging and plants trees, another threat looms: Asian palm oil companies are eyeing Africa’s forests to feed their growing populations. Liberia has signed deals with two and China on Thursday proposed a vast project in Democratic Republic of Congo.

«The big unknown are the Chinese,» said conservationist Terese Hart who has worked in Congo for decades. «They are looking at the interior for exploitation, including palm.»