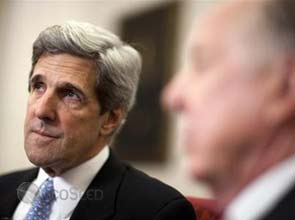 The delay means Democrats have little time to advance the complex legislation amid intense political pressure in the weeks before the November congressional elections.

Senate Majority Leader Harry Reid said he plans to bring up a narrower energy bill next week that would revamp offshore oil drilling rules in the wake of the BP oil spill while returning to the broader legislation sometime after senators return from their summer recess in September.

«Unfortunately at this time we don’t have a single Republican on board,» Mr. Reid told reporters.

Democrats said they hope to pass the scaled-back bill before leaving town for their August recess.

Some Democrats hoped to attach climate legislation to that bill with the hope of attracting Republican support.

But Mr. Reid said he could not get any Republicans to back a comprehensive energy bill that would include provisions intended to combat climate change such as caps on carbon emissions or mandates for power companies to generate more alternative energy.

«We will fight that out in September,» said a Democratic senator who did not wish to be quoted by name. «It will be tough to win.»

Republicans have been near unanimous in their opposition to climate change legislation, saying the bill would be little more than an energy tax that would imperil an economy struggling to recover from recession.

President Barack Obama has made action on climate change a priority and the House of Representatives approved a wide-ranging bill last year. But lawmakers and environmentalists are increasingly doubtful a comprehensive bill can pass the Senate this year. If Republicans make gains in November’s elections, the effort could be stalled for some time.

Environmentalists said the decision to delay action on the broad climate legislation marked a serious setback.

«It would seem like the longest of long shots to me because the window for opportunity in the fall before the election season goes into high gear is very small,» said Frank O’Donnell, president of Clean Air Watch, an activist group.

Democrats need at least some Republican support to advance legislation in the Senate since they control 59 seats, one short of the 60 needed to overcome procedural hurdles.

The scaled-back energy bill would promote natural-gas vehicles in a bid to cut oil imports. It also would promote energy-efficient houses and businesses, Mr. Reid said.

Mr. Reid said the bill would ensure that BP pays for the cleanup of the Gulf of Mexico oil spill and prevent future disasters, though he did not offer specifics.

Several Democrats said they thought the bill had enough support to pass the Senate – including Senator Ben Nelson, who frequently votes against his own party.

Democrats hope to pass legislation that would curb emissions of carbon dioxide and other gases that scientists say contribute to rising global temperatures.

United States scientists have said that this year has been the hottest on record across the world.

Congressional inaction would cast a pall on global talks that have lost momentum since December’s summit in Copenhagen.

«This must not stand, it will hurt us, hurt our children and hurt the regard the world has for U.S. leadership,» said David Hawkins, the director of climate programs at the Natural Resources Defense Council activist group.

China, which led a bloc of developing-world countries opposed to mandatory carbon limits, might impose more pollution controls on its economy than the United States. China, the world’s biggest greenhouse gas emitter, plans to launch a carbon trading market during the next five years to boost energy efficiency, according to the China Daily newspaper.

Mr. Obama has pushed the United States Environmental Protection Agency to take unilateral action if Congress fails to pass a bill. The E.P.A. has begun issuing rules to cut emissions from cars and requiring power plants to have permits to emit carbon dioxide.

Democratic Senator John Kerry and independent Senator Joe Lieberman have crafted a bill that would impose carbon caps on utilities. Previous legislation also would have put caps on emissions from manufacturers and transportation.

Some power companies such as Duke Energy want a climate bill so they can move ahead with billions of dollars in investments in new low-carbon power plants.

Mr. Lieberman said the Senate could take up their bill in September. «I think there’s going to be a lot of interest in doing something broader when it comes to energy independence than just oil spill,» he said.

Mr. Kerry was upbeat that a climate bill with carbon caps would eventually pass.

«As long as I am in the Senate and I’ve got another four years … we are going to keep pounding away on this.»

He said he met earlier on Thursday with one Republican, who has «indicated willingness» to work toward greater coalition in the Senate for a larger climate change bill.