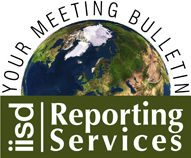 “If we want to salvage our common heritage, a new and more balanced distribution of wealth is needed, both internationally and within each country. Social equity is our best weapon against the planet’s degradation,”

If we look back to the first Rio Conference in 1992, a number of successful outcomes can be identified. The Rio event created a deadline for ongoing negotiations on two multilateral environmental agreements: the Conventions on Climate Change and Biological Diversity. Delegates in Rio agreed to negotiate additional MEAs: the Desertification Convention and the Straddling Fish Stocks Agreement. Agenda 21 – the blueprint for creating a sustainable planet in the 21st century, with 40 chapters covering the main challenges facing our ability to live sustainably on the planet – was negotiated specifically for the Summit. In addition, the Rio Declaration – a set of 27 principles that have found their way into domestic law in many countries – and the Forestry Principles – an attempt to guide us all to manage the decreasing forests in a more sustainable way – were adopted. And, the UN Commission on Sustainable Development was created to track implementation of the Rio agreements. Finally, the Rio Earth Summit created a role for stakeholders in developing policy and implementing the agreements.

Ten years later, in Johannesburg, the world tried to correct the direction that we were on. The original vision of the 2002 outcome was a New Deal between developed and developing countries. The final outcome did not achieve that goal, though, and in the end we had to be satisfied with a few additional targets, perhaps the most significant being the sanitation target.

That brings us back to the aftermath of the Brazilian President’s speech. On 4 November 2008, the G77 and China tabled a UN General Assembly resolution calling for a new Earth Summit. This represented the first time that the call for a Summit on sustainable development has come from developing countries.

On 12-13 November 2008, Stakeholder Forum hosted the first workshop on Earth Summit 2012, which was attended by government representatives, civil society and intergovernmental organisations. The outcome of the workshop was the Donostia Declaration, endorsing a Rio+20 Earth Summit in 2012 – the Declaration was translated into five languages and served as an invaluable resource to inform the advocacy of stakeholders all over the world. Developed countries were not ready to discuss a new Summit in December 2008. They deferred the decision to the 2009 UN General Assembly.

The Challenges
In 2009, it became clearer to governments and stakeholders that the Summit could have a significant role in reframing the economic debate around a “green new deal.” As countries published their recovery packages from the financial crisis, HSBC reviewed them to see how green they were and there were some very heartening results. China’s recovery package was, according to HSBC, 35% green. The European Community’s was 53% and, amazingly, South Korea’s was 83%. At least the discussion on sustainable development was being listened to by the finance and development ministries. It was as if we were now back to addressing the Stockholm Summit’s themes of ”Limits to Growth,” now knowing more clearly that these limits are not as far in future as we had thought – the most obvious ones being climate change and ecosystem loss.
Added to this was a new discourse emerging around environmental security issues. Our newspapers and media are full of terms such as Energy Security, Climate Security, Food Security, Health Security and Water Security.

The Agenda
The Summit agenda, as drafted in the UN General Assembly resolution, suggests delegates should consider:

The Opportunities
The Summit offers additional opportunities to those identified in the GA resolution, including:

A common work programme for the Rio Conventions in the area of REDD
A new Mercury Convention
The first internet Summit reaching out to stakeholders globally
A point at which possible agreement in Johannesburg by the 2011 UNFCCC COP on a legally binding agreement could be signed
Two possible conventions coming out of the Summit supported by stakeholders, related to the Green Economy:

a convention on Corporate Accountability, possibly bringing together the new ISO 260000 standard and the OECD guidelines; and
a convention on Principle 10 of the Rio Declaration: access to information, participation and justice in the area of environment.

The Rio Spirit
Stakeholder Forum, Brazilian Forum of NGOs and Social Movements for Sustainable Development and Environment (FBOMS) – Latin America, Environment and Development Action Africa (ENDA) – Africa, and Participatory Research Information Asia (PRIA) – Asia have created a partnership to mobilise stakeholders for the Summit.  Leaving Rio in 2012, we hope we will all be full of the ‘Rio Spirit,’ ready to be part of the answer, part of the engine of implementation, part of a global community that has agreed to work together to make this planet a sustainable one for all. Whatever happens in Rio, we have to change the way we are living on this planet. To, as WWF has said, be part of ‘One Planet Living.’ This idea was perhaps put best by Robert Kennedy in 1968, when he said: “a revolution is coming, a revolution which will be peaceful if we are wise enough; Compassionate if we care enough; successful if we are fortunate enough— But a revolution is coming whether we will it or not.  We can affect its character; we cannot alter its inevitability.”